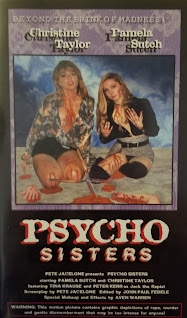 A trio of sleazoid horn-dogs break into a house inhabited by three beautiful sisters (The Sicole sisters, get it). They then rape and strangle the youngest sister, Janice (played by horror hottie Tina Krause) before making their post coitus escape.

The two surviving sisters, Jane (Christine Taylor) and Jackie (Pamela Sutch), are then sent to an insane asylum and once they are released vow to get revenge against the sleazebags responsible for their sisters death. Soon after, the sisters realize that all men are scum (yeah they're probably right) and start to chloroform, strangle, and cut off the man bits of any unlucky guy they happen to stumble upon. 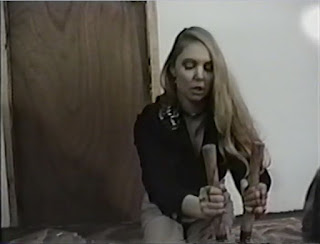 I had been wanting to see this version of Psycho Sisters for over 20 years. Thanks to Ross Synder's Saturn Core Audio Video I now have. I rented the 1998 version (shot on film) on VHS when it first came out and quickly fell in love with the film and how it flipped the typical gender roles in a horror movie. 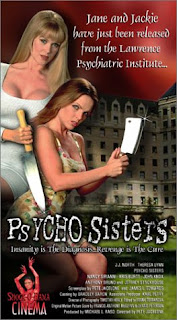 Then some years later when I picked up the DVD version of Psycho Sisters I discovered that the movie was actually a remake of a shot on video movie made in 94 by W.A.V.E. Productions. Afterwards I really wanted to see the 94 version but as any hardcore S.O.V. fan will tell you, tracking down an original VHS of some of these more obscure titles isn't always an easy (or cheap) task. Well now that I have finally seen Psycho Sisters 94. Was it worth the 20 year wait?

Before I give you my answer, I feel I need to talk a bit about W.A.V.E. Productions for those not familiar with their particular brand of cinema. W.A.V.E. Productions was started by Director / Producer Gary Whitson in the late 80's and specialized in Damsels In Distress movies, which they sold via mail-order. Many of their movies were actually conceived, scripted, and financed by their fans who would pay W.A.V.E. money to produce their ideas. 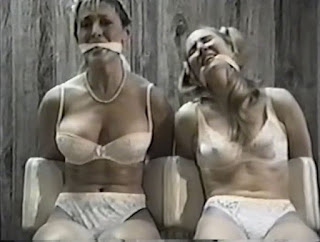 More so fetish movies than straight out horror movies, W.A.V.E. specialized in making movies where women (typically scantily clad or topless) would be subjected to all sorts of inhumane tortures. Chloroforming, strangulation, cannibalism, bondage, drowning, and quicksand traps were just some of the many weird fetishes that were featured in their huge catalog of movies (300+ titles).

Psycho Sisters actually deviates from the typical W.A.V.E. formula by swapping the gender roles. Men are the weak and powerless victims being stripped, chloroformed, and strangled by the female leads who have all the power in the situation. This is an aspect I can appreciate even though I don't particularly enjoy watching guys writhe around in agony in their tighty whities for long stretches of time. 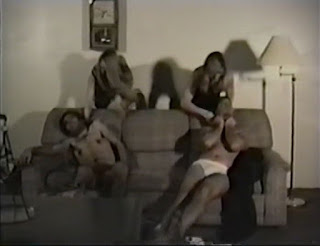 Like many W.A.V.E. movies there is very little plot and most of the run time is spent indulging in the aforementioned fetishes. After the first 45 minutes I found myself getting bored during the repetitious scenes of guys being tied up and victimized and started to impatiently await the finale.

The acting is pretty good and the soundtrack has some cool tunes including some Bill Hellfire stuff, but ultimately I felt there was not much substance to this one. It's pretty much just the sisters going through the same motions over and over again with each one of their unlucky victims. 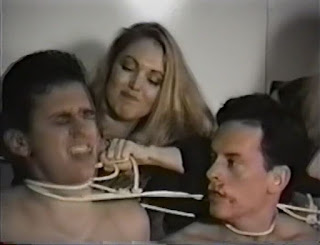 Ultimately I was let down by the 94 version of Psycho Sisters and still prefer the film version from 98, but it is cool to see the origins of those crazy castrating horror hotties. The concept is great, but you can only watch so many half naked guys being tied up, chloroformed, and strangled before you start to get bored (I'm sure many ladies may disagree with me on that one).

I will say though, I give huge praise to Saturn Core Audio Video for giving this a real nice VHS release. After the film concludes there is some bonus content including an interview with Co-Director Pete Jackelone as well as scenes from an even earlier demo version of Psycho Sisters.

If your a fan of WAVE films or have seen the 98 version you may want to check this one out otherwise I'd say stick to the version from 98.