Here it is, the trailer for our latest in house production Natasha Nighty's Boudoir Of Blood! This is a direct sequel to last years SOV epic Zombarella's House Of Whorrors and will be available on DVD on November 13th!

Tony talks about more DVDs in the SOVHORROR DVD line as well as a few spoilers on what's coming in the future. To pickup any of our releases check out our Store page. 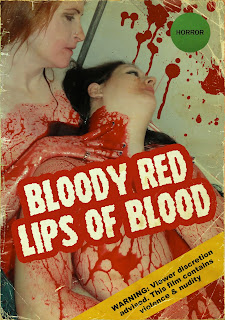 Two hot lesbian vampires are picking up victims at a local rock club and having a bloody good time! Meanwhile, Professor Bartel is mourning the mysterious death of his daughter, bugging local detectives about the case. He may be angry about their lack of progress, but is he really a “mad” scientist? Check out this deliciously sleazy shot-on-video gem from the Warlock Home Video Vault to find out!!! 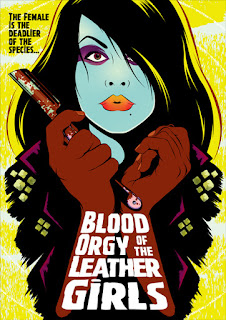 A violent, hate-filled gang roams the streets asserting female dominance. Searching for a rapist, these leathered ladies stop at nothing as they castrate, drill and slash their way through dimwitted dudes and clueless policemen. Only two types of men remain... those who leave the toilet seat up and those who don't - and both have oppressed womankind for far too long! Authentically written and directed by a women (as they self-identified at the time), in a story only they could tell! 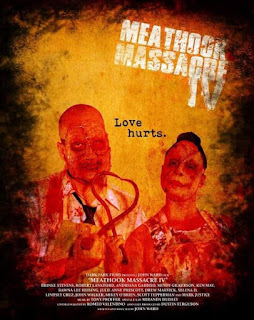 A few years ago, I had bought a 10 dvd custom box set from Screamtime Films and one of the movies on it was a bloody Christmas slasher short called Axemas. Not only did it have some bloody and creative kills, but also a lot of love for old fashioned shot on video horror. Not too long after, the movie’s director, John Ward sent me Axemas 2 for a review and just recently he sent me his contribution to the Meathook Massacre series, Meathook Massacre 4. I can’t really compare this installment to the others because I’ve only also seen part 1 and I barely can remember it, although I do remember enjoying the blatant Texas Chainsaw Massacre-worship. What I can say is I really enjoyed this one! 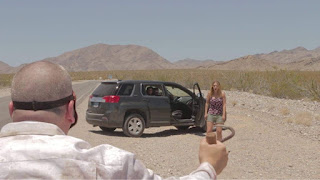 A group of friends on a road trip to Las Vegas accidentally kill a woman in a hit and run, but they definitely killed the wrong one because her relatives are all psychotic cannibal killers! This movie is not a total gorefest, but when there is some it’s nice and graphic! And don’t expect a high-budget display of special effects, but what you can expect are some gruesome gore scenes like, heart removal via punch through the body, double meathook disembowelment, throat slashing, gutting, and a few more! It takes a little while to get there but when they’re on, fans of micro-budget gory horror will really enjoy them! I definitely did. 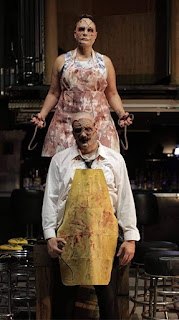 There is also an appearance towards the end by B-movie veteran, Brinke Stevens and of course she gives a great performance as one of the deranged cannibalistic family members. I think every actor in this movie did a pretty good job too. Usually in a lot of micro-budget horror movies, actors will give an over the top terrible performance on purpose, but that didn’t happen here too much. I think this is some pretty solid low budget horror that’s entertaining as hell and shows a lot of love for old shot on video horror with better than average acting, cool looking and decently menacing main killer, and some nice gruesome gore here and there! I recommend it. 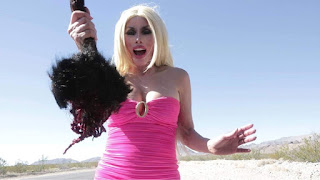