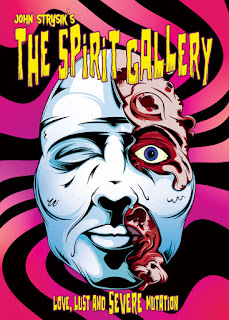 "Dream-like, hallucinogenic ... worth a viewing for fans of David Lynch."
- POP APOSTLE

"Blurs the lines between reality and hallucination ...  like Ken Russell in Lair of the White Worm and Altered States"
- VOICES FROM THE BALCONY

"Reminded me of the Brian Yuzna film Society"
- BRIANDEAD NETWORK

- The Spirit Gallery (has) a notable Lovecraftian feel"
- BOYS, BEARS AND SCARES

For the first time on DVD!!! SOVHORROR.COM is pleased to present John Strysik's rarely seen S.O.V. from 1995, The Spirit Gallery!

A woman obsessed with a secluded artist travels beyond reality in THE SPIRIT GALLERY!

Gwendolyn Creed was a God-fearing woman until she met B.A. Catch and his fantastic abilities. A legendary and reclusive artist, Catch could manifest ectoplasm from the palms of his hands - and steal your soul in the process. Sculpting faces out of soul-matter, Catch opens doorways into alternate dimensions where pain and pleasure combine. People are beaten, stabbed and crucified. The body is altered, the skin diseased and in need of new host to survive - but can love win out?

From John Strysik, a director on George Romero's "Tales From the Darkside" and screenwriter of Stuart Gordon's "Stuck" and "Deathbed" comes THE SPIRIT GALLERY! A Semi-Divine Comedy of Love, Lust and Severe Mutation.


" The Spirit Gallery is a creepy little feature...

"This dream-like, hallucinogenic release is worth a viewing for fans of artsy horror or David Lynch."
POP APOSTLE

"it's eroticism in the vein of Hellraiser..., Running behind it all,though, is a deeper musing about what it means to be obsessed... It's the olive in a cocktail that makes The Spirit Gallery a drink of a decidedly different flavor"
GET ON MY DAMN LEVEL!!

"With dreamlike hallucinatory sequences... the film goes from horror to something much more rather quickly. ...you will enjoy the film immensely and be glad you own it."
REPULSIVE REVIEWS

" ...this is one of the slicker SOV productions I’ve seen, with some imaginative visual compositions, a terrifically inventive script and well-chosen San Francisco locations...

...innumerable hallucinatory interludes that in true Bunuel fashion are freely enmeshed with “reality,” and also the finale, an insane mélange of elaborate SOCIETY-like mutation effects... that’s astounding by any conceivable standard."
THE BEDLAM FILES

"The Spirit Gallery is a fairly bizarre film that frequently blurs the lines between reality and hallucination. It mixes horrific and religious imagery much like Ken Russell did in Lair of the White Worm and Altered States...

If you’re looking for a film that occupies the mid-ground in weirdness between the average low budget horror and something like Gabe Bartolos’ Saint Bernard then The Spirit Gallery would be a great choice.
VOICES FROM THE BALCONY

It reminded me of the Brian Yuzna film Society...

...if you’re looking for a film that’s rare and not seen by many other horror fans, you’ve found it.
BRIANDEAD NETWORK

The Spirit Gallery (has) a notable Lovecraftian feel that was all the rage in that period of horror history.
BOYS, BEARS AND SCARES