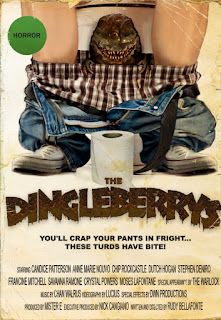 SOVHORROR is pleased to present the Warlock Home Video shot on video stink-fest THE DINGLEBERRYS. This new Special Edition DVD is loaded with all new special features that are so rank that they were banned by your local plumber.

When Adrianne spots (and smells) some strange lights in the sky, she has no idea of the fecal fury which is about to invade the small town of Sleepy Hollow Heights. These are no normal aliens invaders though, they are a race of flesh-hungry evil space turds whose mission is to wipe out the human race. Aided by the new kid in school Quasar Helix, an intergalactic bounty hunter of the smelly kind, Adrianne and her friends in the horror club must stop the pungent pint sized poo poos before they flush humanity down the toilet for good.