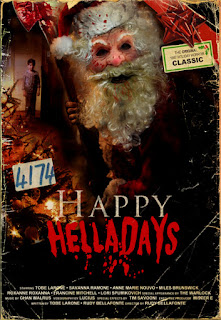 SOVHORROR is please to present Warlock Home Video's yule time horror holiday classic HAPPY HELLADAYS! This all new Special Edition DVD is loaded with new bonus features that will scare the hell out of you.

When a baby is left on the doorstep of the Delta Gamma Sorority house in 1974, the girls did not expect to be DEAD 13 years later! In Happy Helladays, witness the perverted and immoral break down of Alister Frohaim, a 13 year old raised by the house mother at Delta Gamma. After Being picked on, mistreated, spit and laughed at for many years by the teenage sorority girls that dwell at the house, Alister snaps and brings down an unholy and bloody vengeance to the girls on Christmas Eve. Dressed in a Santa outfit, Alister slays his way through his presents of female flesh. Will the house mother be able to stop the Christmas massacre or will Alister reign in spilling more blood?