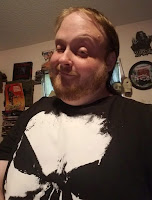 THE ROAD TO B-MOVIE MADNESS
by Jonathin Knight

Since I was 5 I've been deeply in love with horror movies. I remember sitting on the floor in front of a TV watching some program end and the next one starting. Lightening struck over a big ugly house as the camera crept up to it and inside of it before heading into a crypt. A ghastly man rose out of his coffin and screamed as slime oozed down on the screen and finally the title appeared: TALES FROM THE CRYPT.


Hello my name is Tony Masiello and I am the webmaster at www.sovhorror.com. In 2011 I started working on a documentary about the rise of shot on video horror movies of the 80's and beyond. These movies were highly influential to me as a kid and convinced me that with a little bit of money, some friends and a lot of heart I could make my own movies too. Soon after this discovery I started making my own horror shorts and pseudo trailers with my friends and eventually decided to go to school to pursue a career in the film industry. 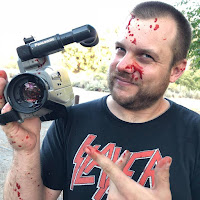 AN SOV MANIFESTO
by Matt Watts


Differing sub genres of film are a slippery slope to fall down. For example, saying you are a fan of “horror movies” is a pretty broad statement. To some folks, horror begins and ends with the Universal classics. Others would think of sixties Roger Corman or William Castle type thrillers. A good majority of horror fans would think of the seventies and eighties explosion of slasher flicks. And somewhere waaaaaay at the bottom of that slippery genre slope, rest the enthusiastic fanatics of SOV horror.

REFLECTIONS ON THE DRACULINA EMPIRE
by Tim Ritter


It had to have been sometime in 1987 when I was introduced to Hugh Gallagher by Donald Farmer. I had just finished shooting KILLING SPREE and Hugh had an upstart horror ‘zine called DRACULINA that wanted to interview me about TRUTH OR DARE and KILLING SPREE, my two 16mm horror flicks that came from the mid-80’s and went direct to VHS. Hugh sent me a copy of DRACULINA # 6 and I definitely wanted to be a part of what he was creating! Here was coverage of the kind of movies I loved (and aspired to make!) and the people that made them---past, present, and future! I YEARNED to be a part of this new magic kingdom!

The summer of 1986 saw the release of my biggest direct-to-video feature film to date, TRUTH OR DARE?- A CRITICAL MADNESS.  The movie received an onslaught of publicity in both the national and local [South Florida] scene, where I grew up.  At the time, I was just eighteen years old and the press seemed fascinated that a “kid” of seventeen had made a $200,000.00-plus splatter movie that was shot in his Florida hometown that was now being distributed around the globe by the time he had turned eighteen. It was an angle they played up everywhere, from CNN to THE PALM BEACH POST.  I recall one article in particular running in THE PALM BEACH POST titled TEEN PUTS SCREAMS ON VIDEO SCREEN, and a lot of local folks wanting to collaborate or get into the business of moviemaking contacted me.