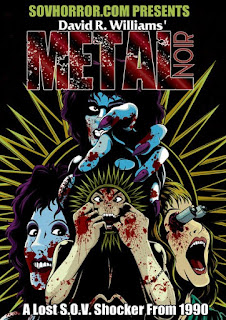 Hello my name is Tony Masiello and I am the webmaster at www.sovhorror.com. In 2011 I started working on a documentary about the rise of shot on video horror movies of the 80's and beyond. These movies were highly influential to me as a kid and convinced me that with a little bit of money, some friends and a lot of heart I could make my own movies too. Soon after this discovery I started making my own horror shorts and pseudo trailers with my friends and eventually decided to go to school to pursue a career in the film industry. Sense then I have worked on many big budget films as well as my real passion, low budget horror movies.

As I started to amass interviews for the documentary with various people involved in making these movies I realized that there was way too much content to be covered properly in a single feature. So I decided to do the next best thing and create a web series called SOV The True Independents and it's mothership sovhorror.com to release the content.

The way I discovered Metal Noir is a funny story as it mirrors the story of a short film I made for the horror anthology Hi-8 - Horror Independent 8. The short entitled "The Tape" is about a horror nerd named Tim (named after SOV pioneer Tim Ritter) who works in a video store that is closing its doors due to declining sales. Tim is given a bunch of VHS tapes without covers from the owner of the shop, as he knows how much Tim loves this stuff. When Tim gets home, to his surprise he discovers that one of the tapes he is given, Bloodgasm is a lost SOV. Tim becomes obsessed with the movie and decides that it must be released somehow so he tries to track down the mysterious filmmaker to try and obtain the rights to distribute the movie. Little did I know when coming up with the plot of The Tape that someday my life would imitate my art.

In 2012 I traveled to L.A to interview Director Jay Woelfel (Beyond Dreams Door) for the project and during our conversation I mentioned how I was a huge fan of VHS tapes. Jay said he had some old tapes he didn't want anymore so he gave me a stack of VHS tapes including some dubbed ones. 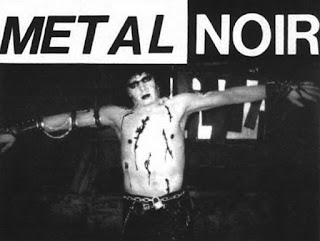 When I got home one tape stuck out to me, it was a dubbed tape with a couple different movies on it including Hugh Gallagher's first feature called Dead Silence (at the time this was a very rare find as it had not been re-released yet). I was a huge fan of Hugh's work so I popped in the tape to watch Dead Silence and noticed before it on the tape was another SOV movie entitled Metal Noir.

Metal Noir was in real rough shape, almost unwatchable so I didn't watch it at the time. About a year later I took a hiatus from the documentary to focus on a series of shorts I was asked to shoot for various anthology projects and eventually forgot about Metal Noir.

Then in the middle of 2018 when I was finished with all these other projects I decided it was time to resurrect the SOV doc series and website. I started going through many of the interviews, DVDs and tapes I had amassed during the process and rediscovered the VHS with Metal Noir on it. At this point I had started writing reviews for the website so I figured I would watch the movie and write a review on it. 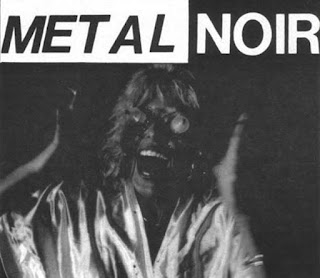 When I watched the movie the first thing I noticed was the names Charles Pinion and Hugh Gallagher in the opening credits, and in acting roles at that. Now I was really pumped to watch this movie as I was a fan of both of their directorial work.

The video quality was pretty bad, at points it resembles the way cable companies would scramble adult channels. As someone who used to watch plenty of crappy bootlegs though I motored on, I really wanted to watch this movie.

I ended up really loving the movie and wondered why I had never heard of it before, surely this is a movie you would think SOV fans would rejoice.  As I started to put together my review for the site I also started doing research on the movie, something I do for all titles I cover. 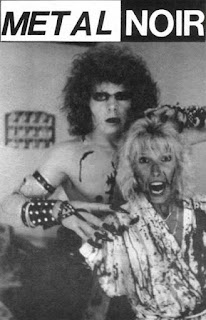 I discovered in an old issue of Draculina Magazine a making of article written by Hugh Gallagher (who not only acting in the movie but also served as the director of photography) and then another issue that stated the movie was slated to be released but the distributor went out of business before it could happen. I now realized that I had a lost SOV in my hands and just like the character in The Tape I was determined to help get it released somehow.

So I contacted Hugh, who I had been in contact with from covering his work as part of the web series. Hugh didn't remember much (it was 30 years ago) but he put me in contact with Metal Noir's Director David R Williams. David was really cool and seemed a bit surprised that someone cared about a movie he made 30 years prior. I then asked him if he would be willing to license the title to me for a release and he said yes!

David still had the 3/4 inch master tapes so he mailed them to me so I could get a new transfer of the movie made for the release. Unfortunately when the masters arrived they were covered in mold and the transfer facility said they could not transfer them.

I then reached out to all the people I could involved with the movie to try and see if I could obtain a better quality copy from one of them for the release, opposed to using my crappy dub.

The only person other than myself who had a copy was Charles Pinion, who had digitized his VHS copy a few years back but had gotten rid of of the physical tape.

When I got the copy from Charles I realized that it was an unfinished workprint of the movie. The workprint had no music, no credits, was missing a bunch of footage and had inferior takes of some scenes. Also because of the digitization process there was a pixelation issues at certain points in the film. Overall though the video quality was far superior to the version I had, so I then decided that my best option would be to re-edit the digitized version to match the cut I had in my possession.

As I mentioned before though the Charles's cut had no music and was missing footage, so I had to edit the music back into the movie. As for the problem with the missing footage and alt takes, I would use my cut to fill in those gaps.

I then remastered the audio tracks of both prints to remove unwanted audio hiss and got to work on re-constructing the film. One thing that was very important to me was trying to match the original cut as much as possible. I also wanted to make sure David was involved in the entire process as this was his baby, his artistic vision and I wanted to make sure he would be happy with the final product.

A lot of hard work has been put into making this release the best it can be. It may not look perfect but unless another higher quality print of Metal Noir surfaces this is as good as it's going to get. I want to thank everyone who has been supportive and helpful in making this release happen especially David R Williams, Charles Pinion, Hugh Gallagher, Jay Woelfel, John Thonen (R.I.P.), Wild Bill Meyer, Judy Jackson, Mike Hunchback and Matt Desiderio. I'm so excited to get this out there so SOV enthusiast of the world can fall in love with Metal Noir just like I have.


THE MAN BEHIND THE DUB

- Side Note about John Thonen from Jay Woelfel

I forgot that I gave you that tape but I remember the tape and the movie. Tell the producers the person they have to thank is John Thonen, who sadly died 15 years ago now.

John wrote for all the genre magazines and knew me originally from BEYOND DREAM'S DOOR having reviewed it, he was always aware of Indie films --he was given a group of them and picked my film out as being worthy of writing about--so he would get screeners and we would exchange tapes--I never met him as he lived in MO. So he picked out those films on that VHS as being ones he thought I'd enjoy. He was the first "internet" friend I had, though back then it was more telephone than internet.

John would be happy to have helped them out, even from beyond the grave now, I'm glad to see him still have some impact all these years later for some indie filmmakers who he always tried to support--though the magazines he wrote for usually just wanted main stream articles and reviews.