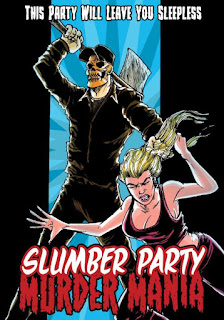 Tina is throwing a party, a slumber party. All the girls are invited. They'll watch movies, talk about boys, play truth or dare, have pillow fights and if they're lucky survive. Because little do they know escaped serial killer Leroy Ravenstock has decided to crash this adolescent shindig, and boy does he have an axe to grind. 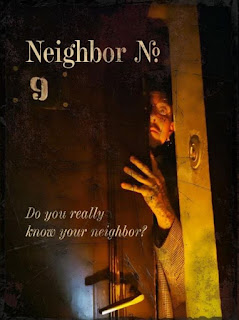 I was a little familiar with the work of Austrian director, Wilhelm Muller from his segments that appeared on the Tony Newton-produced anthology, “Gore Grind” and it was some really gory, bizarre, and blasphemous stuff. Now I’m sent his newest 20 minute short of depravity and DAMN he does not disappoint! Right in the beginning we see our main psycho covered in tattoos wake up in the morning and what is the first thing he does? He masturbates with a severed head, that’s what he does! I had a feeling that from there on, being told “I think this short should be right up your alley!” was going to be very true! It was! 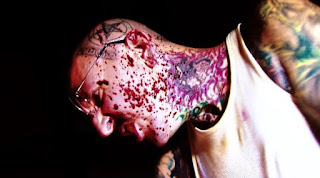 Even though covered in tattoos including his face and head, our main character when not in his apartment has the outward appearance of a overly polite non-threatening individual. That is until a woman with a bad attitude flips this maniac’s psycho switch and let’s say things don’t go well for her. Gore-wise there was a nice amount packed into the short running time! Vagina stabbing, eye-gouging, lots of dismemberment, and more are on display and pretty unflinching in detail I might add! More impressively depraved cinema from Mr. Muller! If you are into the extreme stuff you won’t be disappointed! I sure wasn’t! 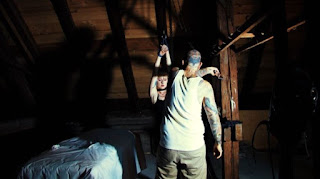 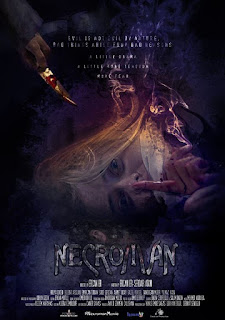 This 12 minute Turkish short movie is directed by Ercan Er and is about Ali, who witnesses the brutal murder of his sisters 40 years ago and the impact it has on him all those years later. Turns out Ali has his apartment decorated with corpses propped up in chairs with fresh clothes on to replicate the family he lost all of those years ago.

There isn’t a ton of gore, but there is definitely some blood and guts in this short. My favorite probably being a particularly brutal throat slashing with a decent amount of blood spray, but this short seems to be more about horrific, downbeat, grimy atmosphere. I know from the title you might be thinking there’s some necrophilia in here, but there isn’t. This is more of a look into the twisted world of a man that endured some serious childhood trauma that now collects corpses as his way of coping with what he had to go through and I think it’s portrayed REALLY well here! This short will be one of 110 movies that will be featured in a German online film festival in October called the Free Independent Film Weekend.

Here it is, the trailer for our latest in house production Natasha Nighty's Boudoir Of Blood! This is a direct sequel to last years SOV epic Zombarella's House Of Whorrors and will be available on DVD on November 13th!

Tony talks about more DVDs in the SOVHORROR DVD line as well as a few spoilers on what's coming in the future. To pickup any of our releases check out our Store page.