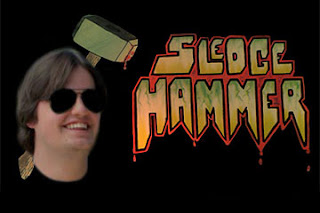 How did you discover Sledgehammer? And what were your thoughts upon watching it?
I first discovered Sledgehammer by scouring the website, Cinemageddon. I used to download anything and everything that was super obscure and ridiculously expensive to buy (I was a broke college student with a $8.00 an hour job). I came across a listing for Sledgehammer and it only had a handful of comments underneath it. A quick look at it's IMDB page found there was only 60 to 80 ratings. All of that, COMBINED with the incredibly awesome looking hand drawn VHS cover art, was enough to sell me. So I downloaded it.

The first time I watched it, I was in a trance. The movie hypnotized me! The insanely long establishing shots, the cheesy slo-mo, the food fight and a killer that morphs from ghost kid to ghost adult all worked together in perfect harmony. The movie left enough answers out at the end that I had to watch again IMMEDIATELY. Who killed the parents at the beginning? Why is there a ghost Sledgehammer? Where did the filmmakers find the perfect John Oates body double and why am I watching him have sex?!? These questions were not answered in the second viewing....so I watched it AGAIN! After the 3rd watch I was convinced that this movie was something truly special.

What inspired you to acquire the rights to the movie?
After realizing that I watched the movie so much that I began to memorize the entire dialogue, I said to myself that I needed to find the director and see what else he has made. So I began to order the entire David A. Prior catalog on VHS through Amazon. While I waited for the tapes to arrive I found David A. Priors website and email address.

Around this time was when Louis Justin announced he was releasing the movie 555 on DVD. He made this awesome youtube video, which he since has taken down, showing all the promotional items he received when he met with Roy Koz (555 Producer and brother of the director) to finalize buying the rights. So I thought to myself, if Louis was doing this than I certainly could as well. Even though I had no idea how to buy rights I really wanted to get Sledgehammer seen by the masses and I knew it would find its audience!

So I emailed David Prior and I asked him if he had the rights because I was interested in buying them and subsequently releasing the movie on DVD.

How did you go about obtaining the rights?
I got an email back from David that was pretty short and to the point, "I don't have the rights." So I did what anyone would have done, I kept bugging him. Who has the rights? Where can I find them? David sent me on a wild goose chase looking for this mysterious producer he worked with on the movie. After months of searching I finally found the producer and asked David if that was his correct address and phone number (I was in full on stalker mood). After about 50 emails back and forth to David I think he finally realized I was serious and that I legitimately LOVED this movie he shot on VHS in the 80's in his apartment in California!! So he came clean, he did indeed have the rights. He told me if I really was serious that he would sell them to me (the cost was super low!) and write up a contract. I told him I've never been more serious. The contract was in the mail and I signed and it sent it back!

What was it like when you first met David Prior?
It was really amazing. By the time I finally met him I had seen a handful of his films and loved his style of zany action movies (Sledgehammer is still my favorite of his works with Deadliest Prey and Final Sanction in 2nd and 3rd respectively).

Originally when I went to meet him, I rented a car to take the 16 hour drive from Maryland to Alabama. I brought two of my friends along with me for the trip and we were going to split the hotel cost for 3 days. Well, about 2 hours into our journey I tried to call David to verify what hotel he was staying at. I got a hold of someone on the phone but they had no idea who David Prior was. This really freaked my friends out. I finally got a hold of David and he verified his hotel with me but it was too late in my buddies' minds. My friends were freaking out and saying "what if we drive all the way down and it's not the right guy? or What if the guy is pulling a fast one on us!?". So they decided they wanted to go home. So I drove two hours back to their houses in silence....I was furious. The next day my then girlfriend said she would take the trip with me because she knew how important it was. So we drove 16 hours to Alabama and stayed in a Super 8 motel...

David at the time was producing a movie he wrote called The One Warrior starring Jason David Frank (The Green and White Ranger from Power Rangers!). So the day after I arrived in Alabama I drove to the set to do the interview. That day I tried to go the set, it was pouring down raining and one of the tiny back roads was flooded, so I had to turn around and wait another day. The next day was beautiful so I tried again and finally made it to the set. I had no idea what David looked like so I parked my car and walked up to a group of guys chain smoking on a porch.

I shook his hand and immediately began to talk to him about his movies. After awhile he walked me down to a stream where the shooting for the movie was going on. I watched and helped out for about 2 hours until it was time for lunch. During lunch I decided to shoot the interview with David on a picnic bench while a group of kids frolicked in the stream behind us.

After the interview we were going to do the commentary but I realized that my camera battery was dying and that I left my charger all the way in Maryland!! I told David we would finish the commentary over Skype. We continued to talk throughout the day and he told me some cool stories. It was finally amazing to be face to face with the director of SLEDGEHAMMER!

Do you know how David feels about the movie?
David doesn't like the movie at all. If you listen to our commentary track on the DVD I think you can hear that pretty damn fast. He made the movie to learn how to make a movie and nothing else. He is happy that he learned what he did by making it but I think he really considers Kill Zone his first true attempt at making films. He used to laugh at me when I told him that I absolutely loved the movie!

You mentioned in the commentary that you had reached out to cast members of the film, can you tell us anything about where they are now and their feelings on the movie?
I could only find a couple of the cast members: John Eastman who played John is now an author,  Linda McGill got married and lives and works in California and Tim Aguilar (John Oates Body Double) has passed away. Those were really the only actors, besides Ted Prior of course, that I could find. I tried to find the actor who played the killer, Doug Matley but I came up blank! Recently I've seen other people have found him and have even done video interviews with him about the movie! David is still friends with Sandy Brooke and he told me she is still gorgeous and doing fine.

How did you get hook up with Intervision for the DVD release?
Out of the blue I get a friend request from Evan Husney who was working with Severin Films at the time. He told me to check my email. The email he sent  was asking me if I had any interest in doing a joint release with Severin's new company they were starting up called Intervision. I saw this as an opportunity to get Sledgehammer seen by more people than if I just released it myself. So I agreed and we released it together. There is some stuff I wish we could have included into the release (more interviews with cast) but Evan already had a deadline for the project before we really even started to seriously work on it. I am still insanely happy with the final product and being on a proper label has gotten us exposure I would have never dreamed of!

Can you tell us about your other work in the micro budget film world?
I do a lot of stuff around Baltimore where I live; I write, direct, shoot and do basically anything I can to support the local indie scene. I work with great local filmmakers like Chris LaMartina (President's Day and Witches Brew), Mark Colegrove (Pleasures of the Damned and Isle of the Damned) and Jason Koch (7th Day and co-owner of Aftermath FX who did the effects on Return of Nuke 'Em High and V/H/S 2). I am also an actor/cinematographer for Warlock Home Video, a company owned by my great friend Chris Seaver up in New York. Together we have made 6 movies together and have no plans on slowing down!

Currently, I just finished a short that I co-wrote and co-directed with Jason Koch called M is for Munging. The short was created for the ABCs of Death 2 contest and we are currently sitting at 7th place. You can help us out by clicking this link and voting by clicking the Facebook like button above the video. Please share it with your friends too! If we win our short gets put into the feature film!!!

Also a film I worked on called WNUF Halloween Special (directed by Chris LaMartina) just had it's Baltimore premiere and brought the roof down! The movie can be purchased here from Alternative Cinema.

On top of all of that, I just shot a proof of concept/pilot for a sitcom called Driven to Succeed. I wrote, directed and shot a short dark comedy called Sleazeball, which should be out sometime next year AND I am working on two feature length scripts....one with Jason Koch and the other with the insanely talented Bob Rose (check out his nutzo, AWARD WINNING, short film Poetry Betwixt Friendship HERE

If I forgot something or someone, I apologize. It's late and I love you!

Any future plans for Sledgehammer? Maybe a part 2?
Maybe in the future. I think a remake would be more plausible to do now than a sequel. You guys just have to wait and find out what David and I have in store for you!