The Tape Of Karma (2018)
Review By Tony Masiello

Marv decides to throw a movie marathon pizza party for his friends, consisting of the most gory and gruesome movies he can find online. The group of friends (all played by Bellamy) have a gory good time until Marv discovers that he forgot about one VHS tape. A tape adorned with a label made of human flesh! The friends put on the VHS, which besides it's abstract and gory images, also contains a warning that anyone who watches it will be cursed by Satan. Now the friends must fight for their survival before they become the next victims of The Tape Of Karma! 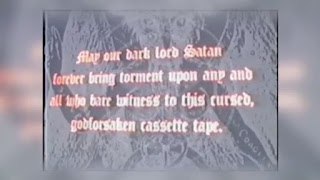 The Tape Of Karma is a one man show made by young filmmaker Michael Bellamy. Besides writing, directing, editing and making the grizzly gore effects himself, Bellamy also plays all the characters in the movie. He uses some clever camera and compositing techniques to achieve this, which actually works surprisingly well. It can get a little confusing at times to figure out what character he is portraying as they they all look the same, with the exception of the stoner character who dons a wig and a beanie. Overall, though, it is really cool to see someone not let casting limitations stop them from achieving their vision. 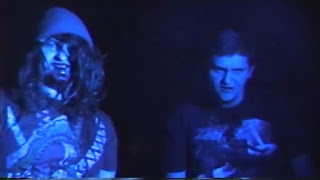 The story, though derivative of other works, is fun. There are some great lines such as when the characters are examining the mysterious VHS tape and one proclaims, "It smells like a dog shit sundae". 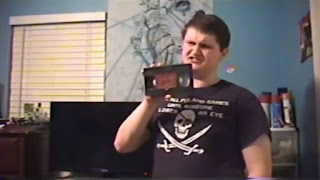 The gore is cheesy but there are gallons of blood on display which will please most gorehounds. We get such gory goodies as a sledgehammer to the chest, gut ripping, a decapitation, a head explosion and a guys balls falling off. 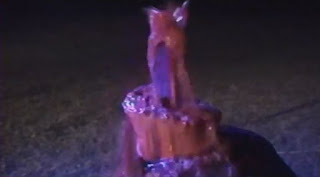 It's really impressive what Bellamy is able to pull off here and I think Bellamy is a indie filmmaker to watch for. He obviously has a great love for the genre and the passion and drive to achieve his vision regardless of budgetary and casting setbacks which is very admirable. Overall, I had a blast with The Tape Of Karma and highly recommend it.

To learn more about Michael Bellamy and his Shot On Videos Films label check out:
https://www.facebook.com/ShotOnVideoFilms