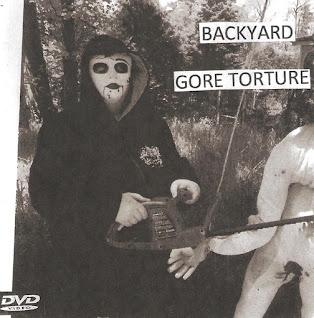 The bloodthirsty butcher Gore Filth has captured a sick pedophile named Tom and has him tied up in his backyard for some good old fashion street justice. Aided by his female accomplice, he grabs an electric hedge trimmer and starts to dismember and disembowel the pervert. Afterwards, his blood lust is still unfulfilled so he decides it's time for some self mutilation.

So where to start with this one? As you can tell from the synopsis this is a simulated snuff movie, but it is far from being a realistic portrayal.

We open on a pretty cool credit sequence which consists of pieces of paper taped to a bedroom wall, while Gore-grind plays over the stereo. It's actually a pretty creative way to get around not being able to make computer generated credits, but would be much more effective if the camera was in focus. 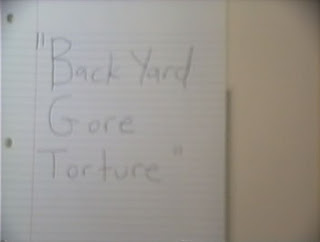 Once the movie opens we follow our executioner, Gore Filth (POV style) into his backyard where his lady friend is waiting with the aforementioned pedophile tied to a tree. When we see the perv, it is obviously nothing more than a badly stuffed dummy, which in no way looks realistic. 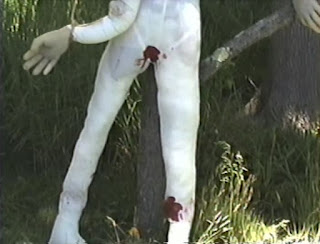 Gore then proceeds to cut predetermined spots on the dummy where meat and blood packs have been prepared, sometimes missing the mark completely, and you see the blood packs fall to the ground. The worst part (or best in this reviewer's opinion) is when he decides to cut the dummy in half and a mound of white stuffing gushes out of the dummy's stomach cavity. It's fake, it's cheesy, and I loved it! 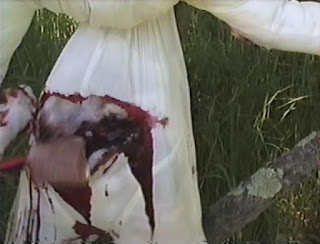 Afterwards Gore asks his female accomplice to help him out with some self mutilation. He cuts off his hand (the kind you buy at the Halloween store) and tells her to pull it away quickly to try and hide the foam interior (which you see anyway). Afterwards, they cauterize the wound with a blowtorch, cut off his foot, and the movies over. 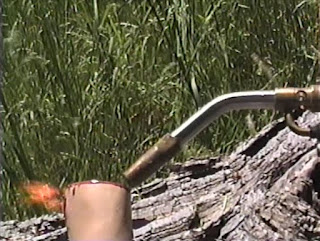 At the short run time of about 12 minutes. Backyard Gore Torture keeps your interest throughout, but probably for the wrong reasons. The dummy is pretty laughable but added to the fun for me. As I'm not a fan of simulated snuff, I did really enjoy seeing that dummy get cut up (especially with all the white batting inside). The whole movie is shot POV style with only a couple small edits and Gore narrates throughout which is pretty amusing and should cause a few chuckles. 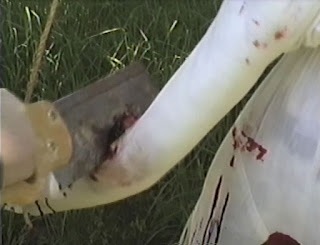 Overall Backyard Gore Torture is surprisingly a pretty entertaining short. If your a fan of backyard no budget cinema you just might like it, but if you're looking for something more realistic you may want to move on. 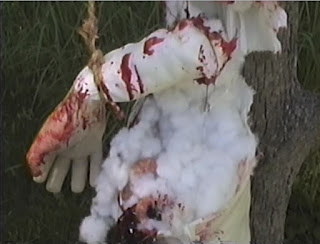 Personally I had a blast watching it and enjoyed it despite its many flaws, which ultimately made the movie better in my opinion.