A horror novelist is plagued by nightmares while trying to finish his latest book about a killer clown doll. His family goes away on vacation so he can try to finish the book without any distractions, but when he receives a mysterious package one evening he finds himself stalked by the same doll from his story.

Bobo is a short, home-made horror flick from aspiring filmmaker Chuck Gotski, produced in 1994. The movie is a family affair as his real family acts alongside him and aided in the production. It's shot and edited quite well for a no budget SOV of the era, and also has some pretty impressive doll effects. 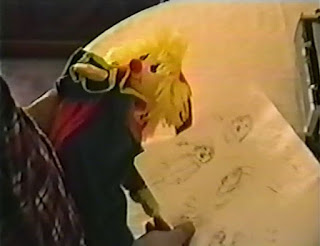 The doll itself resembles a homemade plush toy and isn't very creepy but it's fun watching the demonic dolly torture the novelist, which reminded me of the old Tom & Jerry cartoons in it's staging. The doll does talk, but it's pretty hard to understand what it's saying as it's voice is cloaked by a reverb heavy effect. What I could make out dialogue wise though was pretty silly and fun.

There isn't really much gore, and no body count but it's still an entertaining short that shows what can be done with a little money and some creative thinking. 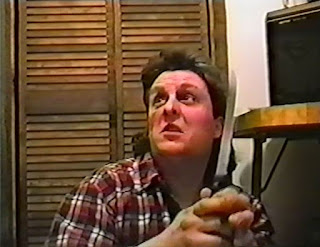 Next up we got Gotski's followup, The Bodyman aka Heed The Curse. This one centers on a comic book artist who is also suffering from a creative slump. His daughter finds an old box in the attic that has a a freaky pen inside (resembling a skull) that she gives him to aid in his work. Further inspection of the box reveals a hidden compartment that contains a note that warns that anything drawn with the pen will come to life. Soon After the pen starts to float in the air and draws a character called The Bodyman. Next thing you know the artist and daughter are both fighting for survival against the masked comic book villain. 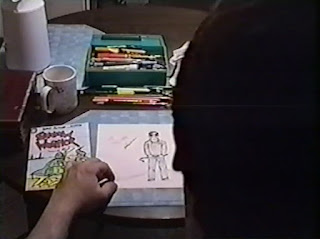 Technically, this short is better produced than the first, but as you can tell from the synopsis the story is very similar (artists being attacked by their work). I thought it was well executed but I personally found Bobo to be the more entertaining of the two. 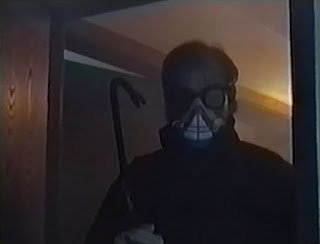 Overall, this is a pretty cool double dose of home-made horror shorts that I think fans of SOV cinema will enjoy. If you can find a copy of the limited edition VHS from Saturn's Core Audio & Video snatch it up while you can.