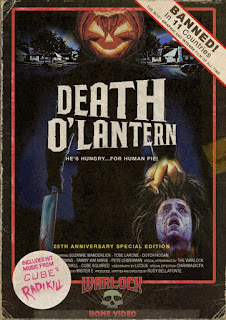 It's Halloween season and the kids of Sleepy Hollow Heights are being stalked by an ancient evil. They're being methodically picked off one by one by the spirit of a dead child killer named Stingy Jack. Now it's up to the fearless band of misfits, known as the Horror Club, to stop the evil pumpkin-headed killer before he devours the five souls he needs to be born again.

Death O'Lantern is a throwback to the classic SOV's of the 80's and 90's from Warlock Home Video and Director Chris Seaver (credited here as Rudy Bellafonte). If you’re not familiar with the work of Chris Seaver he is best known for his crazy, crass, and outlandish dialogue and situations. Think Troma meets Tarantino. His humor and style is not for everyone, especially the easily offended. I'm personally a big fan of his work but it's definitely hit and miss at times.

In this throwback to the classic SOV's, though the crass and gross out humor is more subdued, the script relies more on fun winks and nods to cliches and tropes of the genre. So if you maybe didn't care for some of his other movies but your a big fan SOV I think you should give this one a try. 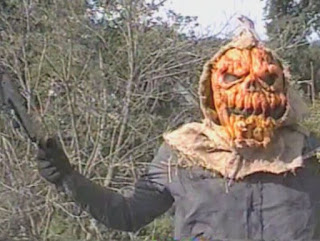 The movie starts off with an intro by The Warlock, a cloaked figure who does a pretty funny Darrin Ramage impression (the guy from the Brain Damage films intros), which sets the perfect mood for the proceedings. 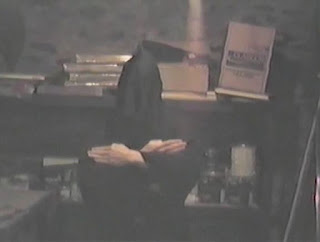 Stingy Jack, as a villain, is silly and fun and has lots of cheesy one liners. There's also some bloody gore fx (credited to Tom Soovini) like a heart ripping, neck slicing and my favorite lit candle through the eye. They by no means look realistic, and you can tell the weapons are plastic but that's all part of the movies charm. 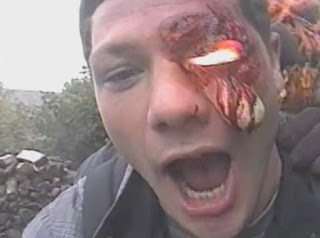 Overall, I really enjoy this one and think it makes for a great Halloween movie for SOV fans. It's a throwback that has its heart in the right place and has fun with the cliches and tropes of the genre while not shitting on it. Instead of watching Halloween, Trick R Treat, or WNUF Halloween Special again this year for the Halloween I urge you to give Death O'Lantern a shot. You may just discover a new holiday favorite.