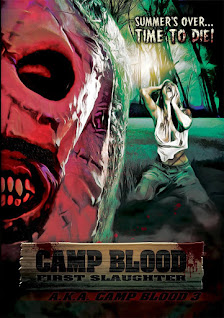 A group of college kids set off into the woods with a bunch of camera equipment (ala Blair Witch Project) to prove once and for all that the legend of the killer clown of Camp Blood is just a myth. The problem is the clown is in fact real, but in a twist the clown is actually killed by another latex masked psycho. Now our new Camp Blood killer straps a camera to their head, hits the record button and goes on a slash-o-palooza.

Camp Blood First Slaughter is technically the 4th Camp Blood movie (marketed as the 3rd?), and the first not directed by series creator Brad Sykes. This time we got veteran SOV director Mark Polonia (who had a cameo in Camp Blood 2) taking over the directing duties. Mark is a skilled director and does a good job with the obviously small budget, but his overuse of CGI blood and digital fx really hurts this one for me. 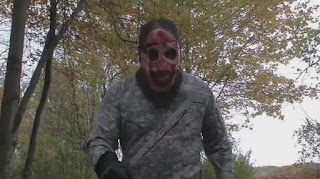 One of the aspects I always loved about the Camp Blood series was the cheesy practical cut-out machete gore effects. In this one there are still plenty of those but the CGI blood splashes that accompany them kind of take you out of the moment. Also there are some silly found footage camera effects that are more distracting than they are effective. Lesson to no-budget filmmakers please stay away from the computer graphics (this coming from a guy who does CGI for movies), and keep to the practical effects. 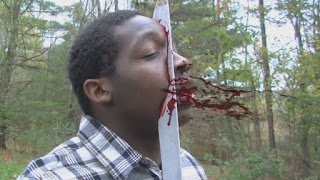 As for the acting, it's good for what it is but not great. There is one cast member who just seems to not be able to stop smiling, even when she is killed. The standout to me in this one is the harbinger of doom character played by Jeff Kirkendall, who gives a nice cheesy performance that harkens back to the great Joe Haggerty performance in the original Camp Blood. 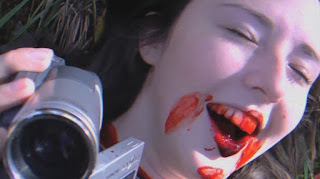 Overall Camp Blood First Slaughter is a decent slasher flick that would have been much better if it didn't rely so heavily on computer FX. I like how it tried to do something a little different by killing the clown and introducing a new killer but ultimately the movie was a bit of a let down due to the digital fx. I still prefer it to the real Camp Blood 3 (aka Within The Woods) so if your a fan of the series I say check it out.