Peter is a weak-willed-mama’s boy. He is trying to survive, while living with his overbearing mother. For breakfast, he eats sardines and washes it down with milk. The movie is already off to a frightening start with this diabolic breakfast concoction. His mother yells at him to get the store and buy more sardines and milk. While perusing the aisles of the grocery store, Peter bumps into a cute punk rock girl named Darcy. He fumbles through asking her out on a date and Darcy is kind enough to invite him to see her band, Unicorn Grinder, play later that evening.

Peter heads down to the bar to see his latest crush’s band play. After their set, he waits to talk to her, but Darcy brushes him off, in favor of partying with her girlfriend. Distraught, he begins his journey home, walking through parking lots and buildings. He starts hearing a voice calling out “help me”. He is ultimately led to a mannequin head after following this voice. Like any emotionally unstable maniac, he brings it home. 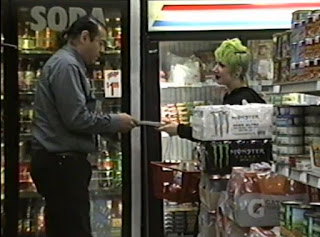 This when we finally get things going. Peter gets home, with his newly found head, his mom begins screaming at him for being late and not letting her know where he was, but she is raging mad that he did not come home with sardines and milk. Inexplicably, his mom shoves her hand into a blender, while making margaritas, then falls to the ground and dies. The head jumps off the counter and begins lapping up the blood. Peter now realizes he will need more blood for his latest love interest. 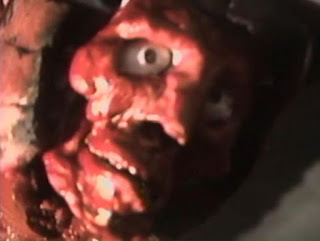 From here on out, the different storylines converge, while Peter is killing to keep the head happy. The last seventeen minutes, or so, is a cavalcade of death. The ending is strong and there is enough humor to carry the lulls. 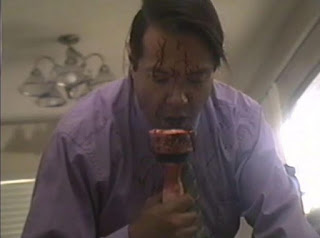 The Head has creative kills, but the Shake Weight bashing takes first place for me. There is a lot of blood in the movie, too, but we get some great gore and nudity (female and male) sprinkled in. Also, we meet Peter’s mother’s uncle’s step-dad’s cousin, Thunder, who may be my favorite character. The music is spot on for this type of film; there is a very 80’s sounding song that repeats the lyrics “booty flavor” many times (I loved it). Overall, this is a great shot on video horror movie. This is a new film, but it delivers the vigor and feel of 90’s SOV classics. I can’t help, but think Michael Keene was influenced by Henenlotter’s Brain Damage and Tim Ritter’s Truth or Dare; both sit very highly in my personal top ten.