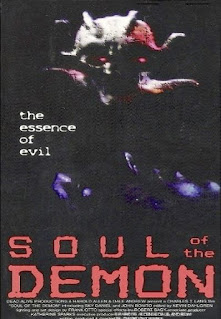 Soul Of The Demon (1991)
Review By Ryan Reading

Two Misfits shirts, two large pizzas, two bodies ripped apart at the torso, and two big influences: Evil Dead and Night of the Demons.Soul of the Demon was shot in 1991, but feels like the 80’s; lots of bad hair and scrunched up crew socks.

We start with two friends, Joey and Toby, cutting school on Halloween. They rip through the desert on their BMX bikes ending at a pond. While discussing party plans they find a small, coffin shaped box. Joey opens it revealing a gargoyle statue. An apparition appears, warning the boys to put the statue back. It contains the soul of the most dangerous demon. Like any good adolescent delinquents, they ignore this sage advice. 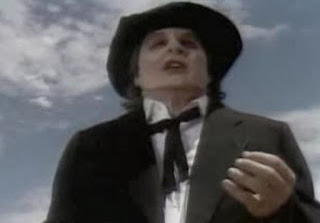 Joey splits from Toby and heads back home. His older brother, Josh, is there and learns of Joey’s day. Josh and his buddies plan to have a Halloween party at an abandoned, haunted, house in the woods. The group has a seance and the party truly begins.The ritual awakens the ancient demon. Now he is killing everyone in beautifully disturbing ways. 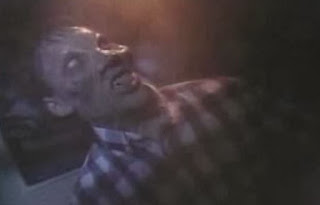 Although the filming and soundtrack have the feeling of a bad Lifetime movie, this is part of it’s charm. It has great gore, creative kills, a solid chemistry between characters, and a wild-ass ending! Sure, there are parts like the basketball game that are pointless and look like shit, but overall this an incredible gem! It is, truly, a shame this film has been languishing in obscurity. It deserves to have a quality, definitive, DVD or Blu-Ray release. I give Soul of the Demon four out of five pieces of righteous doo-doo.