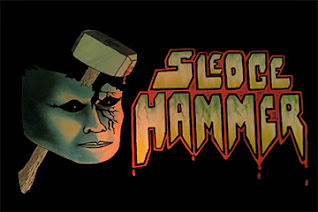 What was the genesis of Sledgehammer?
My initial motivation for making sledgehammer was to prove that one of my screenplays was worth making.  I never intended to be a director.  I just did it because there was no way I could afford anyone who had done it before.

How did you go about getting the movie produced? What was the budget like?
I placed very small one column inch ads in the Daily Variety and the Hollywood Reporter looking for an investor and through that met with Nicholas Imaz.  As far as the budget there really wasn't one.  We pretty much flew by the seat of out pants.

Why did you decide to shoot on video? And what kind of equipment did you use?
We decided to shoot on video because Nick knew some guys who had a video facility for making commercials and such and they were willing to go into this with us.

What can you tell us about the cast and crew?
The cast was primarily friends except for Sandy and a few others who actually auditioned for their parts.

How did you go about getting distribution for Sledgehammer? Was it more difficult to find a distributor due to the movie being shot on video?
No distributor wanted it to tell you the truth.  I had since made "Killzone" with Jack Marion and Fritz Matthews and we took that to a distributor names "Shapiro Ent." and eventually I talked them into taking Sledgehammer as well.

How did you feel about the movie upon completion? Do you still feel the same way about it now?
The night we finished this movie.  I was on cloud nine, man.  I just kept telling myself I had actually made a movie and the feeling was fantastic.  But no, I have never felt that way again - that was just that first timers, one time thing.

When Sledgehammer was completely finished, I honestly didn't care for it much because I did not like all of the slow motion, but I was still proud of it.  To look back at it now is like looking back at school for some people.  Because that and Killzone were in effect the David A Prior school of film making.  It is the way  I learned to do what I do.

Did you ever think that Sledgehammer would become the cult classic it is considered today? Why do you think it has had such staying power?
To be honest, I am not at all certain that it is a cult classic.  I mean I know there is a handful of guys out there who like it but it just doesn't seem like that many.  But I would love to be wrong about that.  And, why people still like it after all these years, I really am not sure.

Any other interesting stories you can share about Sledgehammer?
I am sure there are many, but for the life of me, I cannot remember any of them.  I'm gettin' old Ha Ha!

Any chance of a Sledgehammer 2?
It is a possibility.  If I could find some people to fund it.    But it would be a lot more sophisticated than the first one.  A lot bloodier too.

You have been making films for over 30 years now and have had a very prolific career, what keep's you going?
All thought it's been very tough at times, making movies is just a great way to make a living and I love it.  Pretty much every process of it.  From writing to shooting to editing.  I do it all and I love doing it all.

What is David Prior up to now?
Currently we are releasing "The Deadliest Prey" on DVD.  This is the sequel 1987's Deadly Prey.  You can see a preview of this at www.deadliestprey.com   I am hoping to use the money from these sales to make more movies, so if you want to see more movies from me, please help out by buying one of these DVD's.  If you order it before Nov 1st, it will be personally signed by the star, Ted Prior.