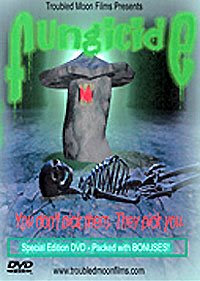 What was the inspiration for Fungicide?
I knew that it was going to be my first attempt at a full-length feature, and I also knew there was a risk of spending too much time writing some intense/complex film that ends up getting stolen or taken in some business that I really didnt understand. My experience with filmmaking was, to that point, limited to short 1 minute features for friends and family, and my ignorance with the business model for distribution would have been a hindrance.

So Mary (my wife) and I were eating out at a Chinese restaurant one night and we were tossing ideas back and forth. We wanted something simple, with over-the-top characters that was an homage to all the gory/great/silly/scary horror films I'd watched for so many years. I threw out the killer mushroom idea, and then we went from there. She had some great ideas on the cast and I think she also came up with the idea that they'd grow to full size. The title was totally Mary also - she came home from the hairdressers one day and said "i got the title! it was on the jar of liquid that they used to keep the brushes clean!".

Where did you shoot the movie?
Primarily in a cabin in the Poconos, PA. Lots of great forest shots and paths there. We originally had a scene that relied on a great horse path, but it was scrapped due to time. We had some pickups locally in Media and West Chester PA for house shots, relying on friends and family. There were a few shots that we were able to guerrilla shoot, just one of those things you have to get inspired when you see the location.

How long was the shoot?
Well the principle photography took place over one weekend - we literally filmed from Friday night through Sunday evening to shoot 90% of the footage. The final shot in the film was also the final scene we filmed, actually at Dave (Silas') house! We were able to take our time with that instead of rushing through. I'd say about 40 hours to shoot the whole film. Most of the time was spent on post-production though.

What kind of camera was the film shot on?
It was a digital-8mm Sony. I didn't want to invest too much before i made the film on equipment in case this was a one-shot deal. Remember, we wanted to see what would happen - the entire film was just experiments on experiments, and I didn't want to be 10 grand in the hole for equipment i wasnt going to use. That camera held up well - it was dropped quite a few times!

What was the budget for the film?
$142 including food for the cast! It would have been $3 cheaper but no one wanted me to have a used toilet brush on set for one of the fight scenes.

Thoughts of the cast?
Everyone did exactly as I was hoping - the character development I'll attribute to Mary, but there was such a vivid explanation for each character, and people had no problem getting into their roles. Dave Weldon did an exceptional job - and that probably came from his an my past where we'd stay up late almost every Saturday night watching B movies. Both Wes Miller and Dave Bonavita didn't even read the script before hand, so i have to hand it to them for getting things on the spot. And both were eager to have fun. Really, almost every take ended with the cast laughing. I had to force my parents into the roles - they wanted to do what they could to help me. If you ever ask them about it they'll deny being in it I think.

What were some of the challenges making the film?
Besides the usual problems with lights, sets and weather, some of the big problems were really mostly logistical. There were so many mistakes made during filming, both in audio and video, that there was almost no thought to be able to fix it in post-production. And a lot of stuff had to be dropped or removed because a tripod was too obvious or people were in the wrong clothes or stuff was just out of sequence. And I always had in the back of my mind that I'd need to create the CG mushrooms. Since i had only done brief tests i wasnt sure what i'd be able to pull off.

There is a lot of CG in the film, can you tell us more about that process?
I had been tooling around with CGI for the better part of a year and a half before the film. All self taught, just playing around. Nothing i thought was remotely professional, but stuff i wouldnt be able to do otherwise. I don't like relying on it, but there was no way i was going to be able to get 20 people in mushroom costumes for the film (at that time). I also knew that the overtly-CGI look to the mushrooms would be explained in the sequels. I'm by no means an expert, but you have to have an idea long in advance of a shot as to how and where CGI will be used. Since it was used as a crutch in a lot of places it really stands out. And I also figured no one was going to see the film so I let a lot slip too. Who knew it would go on as it did!

Can you tell us about the distribution process?
I was stunned by how quickly offers came in for the film - i mean come on, if you don't "get it" or don't like B movies this wont be your thing! But I was very pleased and happy for that response. Getting distribution can be both good and bad; i figured i'd run my course as selling it at conventions so I saw nothing to lose in giving it a try. You have to understand that the distributor has to see it fit in their model for sales; they have to know how to market it. I was extremely happy with the offer I took and we ended up renewing the contract until just this year. With the film back to me, i intend on having special edition DVD version for 2009, with some more details on a sequel.

Are you happy with the film overall?
Oh yes. It exceeded what I believed I could do, let alone the efforts of everyone involved to make it a success. We were exhausted but will have fond memories of the shoot. And to this day, to be still getting emails from people around the world who say they liked it and laughed and enjoyed it - well that just beats everything. There was so much I learned from doing it - you cant pay for that kind of eduction. I'm no different than any other artist that would like to continue to update, change, and alter their past work, so there are some things i wish i could go back to re-do. But it was a joy and to have the film have such legs and lasted this long! It paved the way for Suburban Sasquatch!

Can you tell us about some of your influences?
Ridley Scott is phenomenal, i mean just visionary. And of course i find Spielberg, Kubrik and Peter Jackson all so engaging as well.

Any future projects in the works?
Oh yeah, I seem to be addicted! We're right now marketing Zombies by Design and Infinities Lock (2009). I am editing Malevolent Ascent which will be out in 2010, and plan to shoot a ghost movie next month!