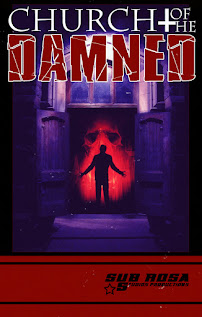 Church Of The Damned (1985)
By Tony Masiello

A small town is besieged by a group of murderous satanists who are on a mission to raise their demonic god. It's now up to two cops to stop their evil plan before it is too late.

Church Of The Damned is actually the first shot on video feature made by veteran SOV filmmakers, the Polonia Brothers, when they were just 15 years old. Armed with a new VHS camera, and taking inspiration from the same year's release - Blood Cult, the Polonia's (along with their frequent collaborator Todd Smith) made this little hidden SOV gem. Unfortunately, due to editing limitations and a loss of interest in the project it was shelved. Then in 2013 is was resurrected as  an awesome VHS Big Box release from Sub Rosa Studios.

The movie, which was re-edited by surviving brother Mark (sadly John passed away in 2008), actually plays very well especially considering the brothers never completed the production. Mark is a very accomplished editor and does a great job piecing together this snapshot of the young Polonia's getting their feet wet with the video format. As for the story, even though they never completed production it seems full and is rounded out nicely with the surviving elements. 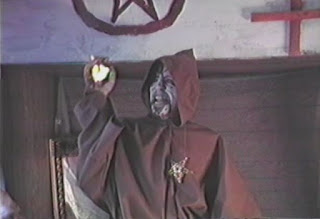 The movie is also clearly inspired by Christopher Lewis's Blood Cult which was released in 1985, which will be a treat to SOV fans. Both movies feature satanic cults as well as a plot point where an ancient amulet has been lost and must be recovered by any means necessary. In Blood Cult, the amulet was a circular coin type object, whereas in this film it is a triangular star that is similar to a Christmas tree ornament (hey, they used what they could get).

The acting is really good for this type of production, especially considering the age of most of the cast. One of the brothers (I believe Mark - they're twins so sometimes it's hard to tell them apart) plays the main cop in a snazzy leisure suit, and  does a great job in his role. The other cop is played by co-director Todd Smith (the cannibal in Splatter Farm) who is a little stiff but still does a decent job. For being just teenagers I think the acting is pretty top notch and I dig all those underage mustaches. 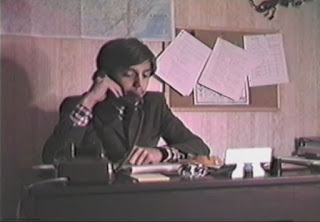 If you have seen any of the other earlier works on the brothers (Hallucinations, Splatter Farm) you know there is going to be a lot of home-made gore on display and there is some great work showcased here. My favorite is during an autopsy scene where a coroner bisects a guys face and reveals the gooey underside. There are also people being cut in half, dick ripping, acid spit, a drill to the face and hackings galore. Considering the year this is made it is even more impressive, as I presume getting your hands on good FX materials to work with back then was no easy task. 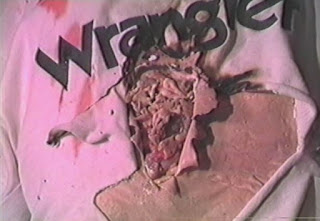 Overall Church of the Damned is a great look at the early passion that the Polonia Brothers had for making movies. I've seen many movies made by young filmmakers and I would say this is one of the most accomplished I've ever seen. The Polonia's really truly embody what I love most about SOV:  with a lot of heart and some limited resources you too can make a movie, amd what a great movie this is. Do yourself a favor and buy a copy today. It's a great hidden SOV gem that deserves more attention.

Buy Church Of The Damned
https://srscinemastore.com/products/church-of-the-damned-big-box-digitally-printed