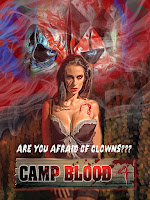 On their way to a concert a group of teens decide to spend the night in the woods of Camp Blood. They soon find themselves on the run from the murderous machete wielding killer clown.

I usually try to put a positive spin on my reviews as I understand how hard it is to make a movie, especially with the limitations most SOV productions face. However, by watching Camp Blood 4 I am quickly reminded of the two types of filmmakers working in the SOV genre. Those who are fans trying to make the best movie they can, and those who see the genre as a way to make a quick buck and exploit the market. Unfortunately, Camp Blood 4 falls into the latter category.

Directed By Dustin Ferguson, Camp Blood 4 is more an example of padding gone awry versus a real movie. It starts off with about 10 minutes of footage from the last entry in the series (Camp Blood First Slaughter), which is pretty much the highlight of this film as it's all goes downhill from here.

When we are finally introduced to our main character named Raven the padding-palooza truly begins. We get to watch her do such exciting things as walk for long periods of time, do her hair, and shop all in real time. These scenes are so long and pointless it will challenge the most seasoned SOV nerds not to turn the movie off. They serve no purpose and are only there to pad out the runtime. 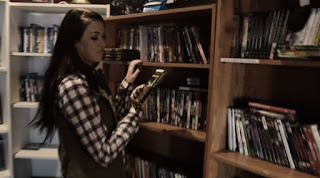 Once we get to the story proper (after more flashbacks from CBFS) the kids are quickly killed off in about 10 minutes. The FX are lame, the characters are lame and you just don't care. We then get the extremely long and painfully staged final chase scene. Watch in slow motion as Raven runs off camera, clown runs off camera, and rinse and repeat 20 times. All of these night scenes are so poorly lit, it’s almost impossible to tell what is going on and really you probably won't care at this point. 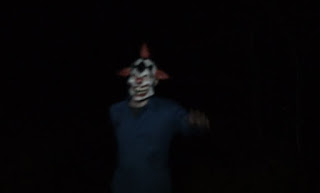 The sound mix is also one of the worst in a modern production I've seen. You will be in a constant battle with the volume button on your remote throughout this movie. It really shows the lack of care put into this production, as they couldn't even bother to take the time to level out the audio in post. 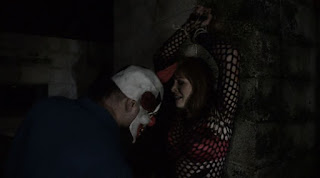 In the end there is probably only about 20 minutes of real movie in CB4 and the rest is pointless padding to get it to a feature length runtime. Each scene plays more as a way to eat up time opposed to trying to develop any sort of real story. I really can't say anything good about this one, which may tempt "bad movie" fans to give it a go, but trust me there are much better ways to spend your time.