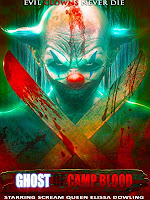 The Camp Blood clown killer is back, but this time from beyond the grave. When the host of a ghost hunting show acquires the mask of the now deceased clown killer he accidentally conjures up the evil spirit. Now, along with a team of amateur ghost hunters, he must put the clown’s spirit to rest before they all fall victim to the Ghost of Camp Blood.

GOCB is the third entry in the Camp Blood series directed by SOV pioneer Mark Polonia, and technically the 8th in the series. Of the latter sequels (post Within The Woods), Polonia clearly has made the best ones (First Slaughter, It Kills) so I was excited to take this one in. So did it live up to my expectations? 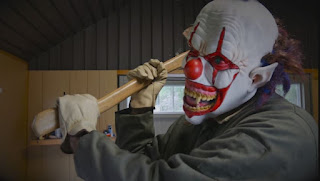 To start, this entry takes a different route than the other films. After a recap of the last CB (complete with Friday The 13th homage) the clown is actually killed off and is now a ghost. Also the setting is different as this one takes place in a television studio opposed to the woods. Some would maybe praise the movie for trying something different, but for me I felt these changes deviated too much from the Camp Blood formula and didn't really add anything new or exciting to it. 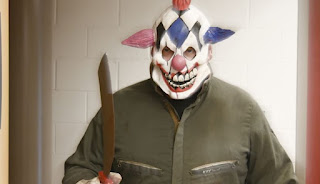 Content wise, GOCB plays more like an episode of Ghost Hunters opposed to a Friday the 13th knockoff. For most the movie we follow along our Ghost Hunting hero and his underlings as they try to find the spirit of the clown using various devices and tactics. At one point our hero uses an EVP machine that has one of the most annoying sound effects I’ve ever heard in a movie - think fingernails on a chalkboard kind of bad. 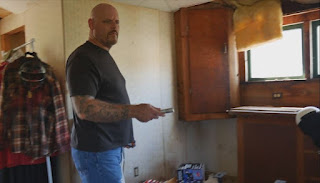 The cast does decent with the material but only one actor shines in this one. Mark Polonia gives a great performance as the seedy television studio head who only cares about big ratings. He does a good job playing an asshole, which is surprising as Mark in real life is such a nice guy. Also one of the actresses from the previous entry in the series returns in a new role, which was a little weird (as she died in that one) but hey, it's low budget filmmaking folks. 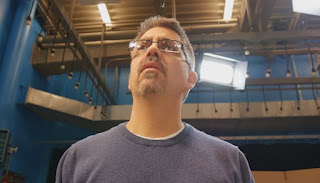 Also this one suffers from way too many unnecessary flashbacks and padding scenes. The weirdest one being from the movie The House That Screamed 2, of the busty Leslie Culton showering. This shot seems to be just randomly shown periodically to get some nudity in the picture and really makes no sense in context to where it is shown (and it's shown many times).

Overall I was a little let down by this one, especially after watching Polonia's CB 7 which was one of the best entries in the series. I get they were trying something different but I don't feel it really worked. Still though this is light years better than say Camp Blood 4 or 5 and is definitely worth a watch for Polonia Brothers fans, especially for Marks great acting performance.