Take a walk with me, if you will, it is 1993. Jurassic Park is the number one movie, but instead of hanging out with Jeff Goldblum and crew, I am in Todd Town! That’s right, Todd Sheets! We are entering the low-budget, SOV, masterpiece that is Zombie Bloodbath!

We begin this journey, with a board meeting, discussing a pressing issue. The radiation levels have gone too high and a mass evacuation is needed immediately. However, it is too late, zombies overtake the living. It is a Todd Sheets movie, so que the loud metal music. Zombies are eating guts; there is blood, goop, and intestines… and we have not even entered the opening credits yet! 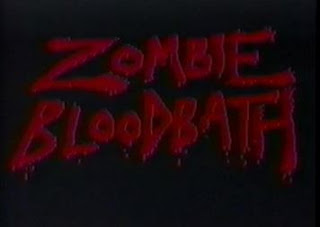 A local news broadcast is underway, which informs us that a new local housing development has been approved on the south side of town. The problem? Well, it will be built on an old government testing site. We now meet Joey and his friend Mike, whom he just met. Mike is played by, the legendary, Auggie Alvarez! If you have watched enough (or any) films by Mr. Sheets, you will recognize enough people, including Joey’s Dad; the incomparable, Jerry Angell! 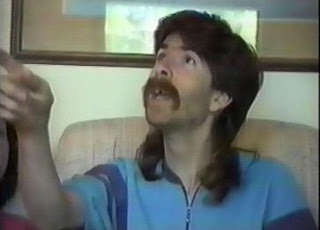 Mike knows some perfect locations for Joey to film some movies at. Joey then persuades his Dad into letting them use the family camcorder and the boys are off. They are visiting a local underpass, with Joey’s sister, when Mike and her fall into a hole. Mike rushes home to get his parents help rescuing them.

While Mike was showing Joey the sites of local legends, we are introduced to a gang of heavy metal females. They are in the midst of a brewing turf war. Soon enough to the two female gangs are brawling. Ending in the, assumed, death of two ladies. The female leader of gang #2, directs the other members to bury the deceased. Turns out one is not dead, but it really doesn’t matter, because when they cover the one with dirt the zombies begin to feast! 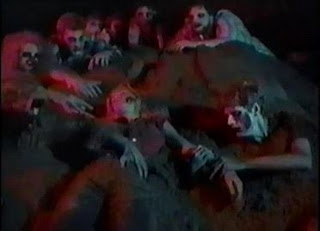 We jump back to the boys, as they are recovering, from the fall, by hanging out in Joey’s living room. They began to hear some noises and immediately grab the nearest sports equipment. Joey picks up a bat, while Mike grabs, the less practical, tennis racket. Eventually, they encounter a group of zombies attacking their house. These are your classic zombies; Slow and prodding. They call their parents again to bail them out. Mike’s dad rushes to their rescue, gun in hand. Which we later learn, when asked why he hasn’t fired the gun, that he forgot the shells in the car: “I forgot the damn things!”.

The two families are now engaged in a, full on, zombie epic. Joey is spin kicking zombies, while his dad gets his intestines ripped out through his butthole (simultaneously throwing up his own guts). Yup, that’s right (thank you, Mr. Sheets).

Possibly one of the most ambitious shot on video horror movies ever made. The cast is large. There are, what appears to be, hundreds of zombies! There are many filming locations. Self-aware dialogue, including the two Dad’s discussing zombie movies. Bonus points, for a great video store sequence, as well.

This is a certified SOV classic! Sadly, I believe, this is out of print. There is a part two and three! It is worth seeking out a copy. If you have not seen this, run, don’t walk, find a copy now! Do it for Jerry Angell. Do it for true, independent horror, made with passion. 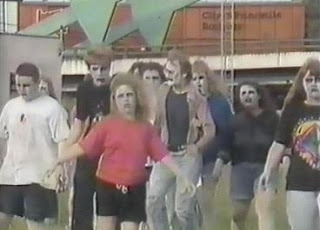