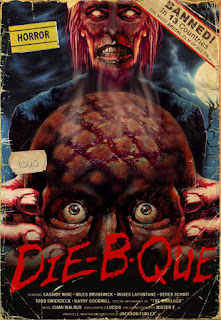 Rick and DJ are throwing the biggest BBQ the town has ever seen. All of the most popular kids will be there. What they do not know is that their BBQ is about to turn deadly.

When a diseased rat stumbles upon the party and urinates on the steak, there will be more than fine meats on the menu. Who ordered the side of DEATH?

Anyone that digests the meat will become flesh eating zombies! The only ones that can stop this party of sheer terror are all around do gooders, Moon Beam and her muscle bound hunk, Brody.

DIE-B-QUE will make you scream till you're hungry for more!