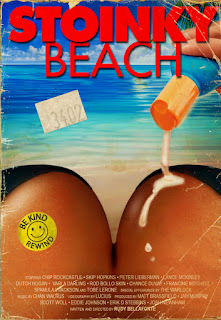 It’s 1986, the weather is hot and the babes are WET! Join Lance, Lucas, Rick and Wheels as they head on down to the coolest beach around, STOINKY BEACH. After Rick's girlfriend Ariel dumps him for spending too much time on his brats and bros, he and his sex-starved buddies decide to travel to the hottest beach around, Stoinky Beach. Where the bros are drenched in sweat and the babes are moist and stoinky! With the help of an alien friend named “Blumpy”, they will not only meet the boobs of their dreams but realize that a weekend at Stoinky Beach will solidify that friends for eternity, loyalty and honesty are their true reward!