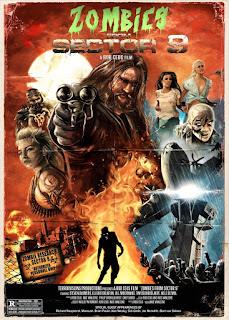 
Years ago, a good friend of mine sent me a great collection of gory short movies and one of the stand out shorts was called “Bride Zombie”. This EXTREMELY gory and well-shot short was directed by Rob Ceus from Belgium. I eventually got into contact with Rob and bought two other shorts he made, “Slime” and “The Writer”. Watching these made me a big fan of Rob Ceus’ work! Now a year later, Rob sends me a screener for a full-length zombie gorefest that he has been working on for a while with his long time collaborator, Inge Vanleene! I have to admit I’ve been very excited to see what Rob Ceus can add to the already very saturated (not a complaint, just saying) zombie sub genre of horror movies. I wasn't disappointed in the least! 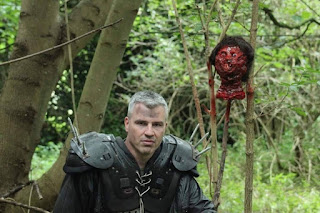 Bookwalker is a slacker that drinks, gets high, and watches horror movies all day, but is forced into being a soldier and a hero when a nuclear reactor’s malfunction causes a massive zombie outbreak! And as if the zombies aren’t enough of a problem, there are groups of outlaws called “raiders” that might be fighting zombies, but are also terrorizing the last of the surviving humans! Shot very much in the grindhouse style complete with grainy filters, coming attractions of gory and sleazy movies, and fake reel changes. I really enjoyed this approach. It doesn’t look corny or overly fake and it’s very enjoyable to me that’s for sure. The characters are cool and there’s massive amounts of well-done gruesome zombie carnage! 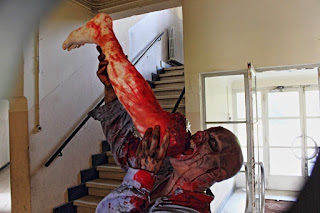 This was shot for about the equivalent of $4000 US and Mr. Ceus and crew do incredible things with it! I know from seeing some of the process unfolding through pictures that a lot of time and detail went into constructing all the killer special effects in this movie. All the hand-done zombie makeup is nice and gruesome looking, the creatures look nice and nasty, and the GORE! Oh there’s some great gore here! Multiple dismemberments, lots of guts being ripped out of people, skin-ripping, beheadings, someone chainsawed completely in half from the head down and so much more! The zombies also looked really cool and not like any I’ve ever seen before! Don’t expect super high budget flashy stuff here! Just incredibly done effects for the budget with a lot of passion that shows. Nice detail to the creatures, the guts are nicely textured and colored, and some nice bright red blood spray galore! 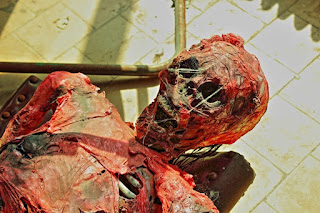 Rob Ceus and his crew did what I think is a fantastic job of bringing a gore-filled, grindhouse styled zombie movie that sure as hell didn’t disappoint THIS fan of their work filled with incredible amounts of passion for the style! Like I said, if you’re expecting high-budgeted flashy stuff, you’ll be pretty disappointed. Fans of grimy, ultra-gory, low budget, gut-feasting, action-filled zombie carnage NEED to see this movie when it’s available hopefully soon! Rob Ceus and Inge Vanleene both have Facebook pages and so does their company, Terrorvisions Productions! Keep an eye out for the release of this great movie and any other upcoming work! If you love low budget gorefests done with passion that are never dull, I promise you won’t regret it! 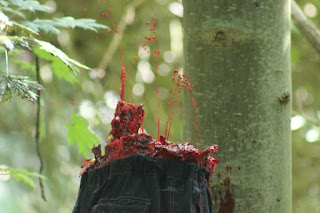