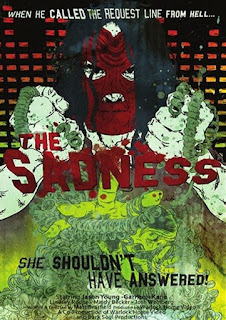 SOVHORROR in association with Blood Scream Comics is please to present Matt Brassfield's 2005 shot on video slasher The Sadness, coming to DVD on December 13th!

Sam and Jason are best buds who enjoy being DJ's at their local college radio station. When their friend Becky witnesses the murder of her neighbor, Sam gets the bright idea to interview her on his show. Little do the duo know that the killer, known only as THE SADNESS is tuned in. Now he is stalking the hallowed halls of the school, and there is no escape from his wrath. THE SADNESS is coming and you better watch out because he will give an all new meaning to the term dead air.