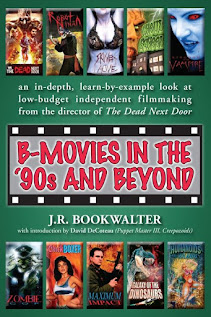 B-Movies In The '90s And Beyond (2018)
Author J.R. Bookwalter
Review By Tony Masiello

Something very sad happened recently in the world of independent cinema. After almost 30 years of bringing great micro-budget movies to the masses, Tempe Video has decided to close shop. Lead by filmmaker J.R. Bookwalter, Tempe Video was one of the most important independent production companies / distributors of the 90's.

When I was a teenager, scouring every mom and pop store for new horror movies to sink my morbid teeth into, I discovered Tempe Video. The movie that first exposed me to Tempe was 1995's Ozone (an SOV classic!). From there on I started to seek out other titles from the Tempe catalog. I also started reading Alternative Cinema, a magazine founded by Bookwalter, that was one of the first magazines catering to fans and filmmakers alike of micro-budget cinema. Since then, I followed his career. Regardless if he was directing or producing, if the name J.R. Bookwalter was attached to the video, I was in.

I was fortunate enough to meet J.R. at the first Fangoria convention I ever attended in the early 2000's. Not only was he a really nice guy, but he had some of the best prices on DVD's ($5!).

When I heard of the sad news and the big blowout sale Tempe was having, I quickly made an order (followed by another a week later) to complete the holes in my collection. One of the items I ordered was the newly revised edition of his book, B-Movies In The '90s And Beyond.

B-Movies In The '90s And Beyond follows J.R.'s career from his early super 8 movies to the six titles he produced for legendary filmmaker Dave Decoteau (for his then new Cinema Home Video label). Most people will probably be attracted to the book for it's coverage of J.R.'s first movie - the Sam Raimi produced, The Dead Next Door (still one of the best zombie movies ever made). However, I was most excited to read about the SOV's that he produced for Cinema Home Video.

J.R. goes into great detail about the insane deal he made to pretty much produce a movie every month for Cinema Home Video and the stresses of doing so with such a small budget per movie - a meager $2,500 a piece. J.R. holds nothing back as he gives an honest, sometimes self-deprecating, view of his creations and the sacrifices it took to make them.

This newly revised version of B-Movies In The '90s And Beyond (first self published in 1992) also has a short chapter about his work post Cinema Home Video. My only complaint is that I wish it longer.

B-Movies in the '90s and Beyond is a great book and I urge you all to pick up a copy before they're sold out. While your at it, get some DVDs (some as low as $1)! Even though he is closing shop for Tempe, I truly hope one day J.R. will get back in the directors chair or maybe even give us another book covering his later DTV work. One can only hope.

R.I.P. Tempe Video you will be missed.