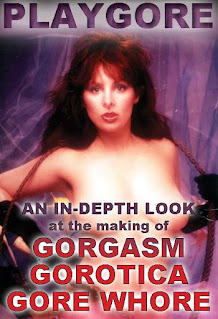 It's no secret I'm a huge fan of Hugh Gallagher's work. Not only did he make one of the best SOV trilogies of the 90's (The Gore Trilogy) but he was also the publisher of one of the best independent horror magazines of the 90's, Draculina. So when I started the S.O.V. The True Independents project, Hugh was one of the first filmmakers I contacted to be part of the it.

For further reference check out the episodes we did covering his movies Gorgasm, Gorotica and Gore Whore, as well as the great article about the Draculina Empire written by SOV alum, Tim Ritter (Truth or Dare series).

Playgore is a compilation of articles Hugh wrote for Draculina about the making of his Gore Trilogy, as well as some newly added recollections and reflections on his work. Also covered in the book is his early childhood, the creation of Draculina, and the making of his first movie Dead Silence.

Hugh is a very good and engaging writer. It's really interesting to read about his early life and struggles (you thought your childhood was bad), and how he overcame them to follow his dreams. It is truly an inspirational story and a good read.

Available on Kindle, this book is a great snapshot of early SOV filmmaking in the early 90's that is a must own for fans of his work and for fans of micro-budget cinema in general. What are you waiting for? Go buy it now!