Satan's Place is a rare SOV horror anthology directed by Scott Aschbrenner and Alfred Ramirez that was produced in 1988. The movie contains four comedic horror stories that are tied together by a wraparound with a young woman who meets the main characters of each story, while she is the main character of the last. So let's take a look at this wickedly fun SOV story by story.

The first story entitled "Disposable Love" centers on an ageing couple who don't get along very well. The husband is a beer drinking misogynist who demands that his wife beckon to his every call for beer and food. One day when she doesn't give him his beer fast enough for his liking, he accidentally kills her. He then decides to chop her up and dispose of the body down the garbage disposal. Soon after, strange things start to happen which ultimately end with his dead wife getting her revenge. 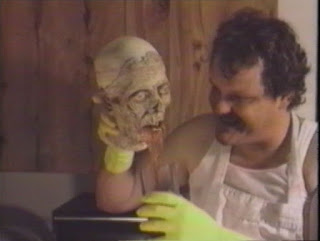 This segment was my favorite of the movie and gives you an idea of the mix of comedy and horror to come. There is some great dialogue exchanges between the couple - one of my favorite being the following:


Wife
Maybe we can go dancing?

This tale also has some cool squishy gore effects. There is a fun dream sequence where the wife kills her husband western style. There's another part were the husband boils his wife's head and pours the liquid from her mouth into a glass, drinks it, and then pukes.

Next up we got "Say Goodbye Sophie". This story follows a beer swelling redneck who accidentally runs over an old man in his pickup truck. The old man barely conscious keeps saying the same thing - "Sophie". The redneck takes the man to the hospital and upon learning that the old man will be okay decides to leave, and do what else but go out to the bar for even more beer. While at the bar the old man dies and when the redneck leaves he hits him again!?! Afraid of what may happen to him for hitting the same guy twice he takes the body home (a pretty hilarious sequence) and soon after gets his comeuppance. 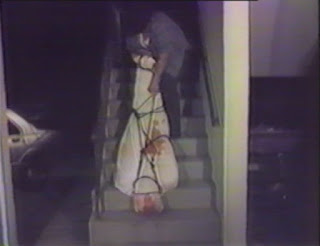 This story was fun but the ending didn't make a ton of sense. I really loved the sequence when he takes the body home and is dragging it to his apartment. To top it off, when he gets inside he gives the stiff a beer!?! It's a fun segment but the payoff is a little weak.

Up next is "Too Much TV". This one is about an old crabby lady whose daughter is the queen of the couch potatoes. The mother just wants to spend some quality time with her daughter, but the daughter is too involved in watching a horror host show on TV, hosted by a guy named Dick Slasher. While watching the broadcast she fantasizes of ways to kill her mother based on segments from the movie she is watching. Things then take a twist towards the supernatural when Dick Slasher tells the daughter that she should kill her mother. 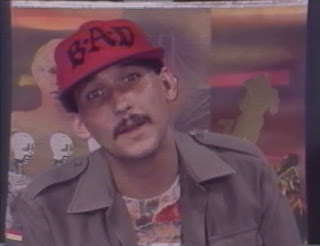 Another fun tale but not as good as the previous two. The highlight of this one is all the great fake movies playing on the TV. Titles such as: 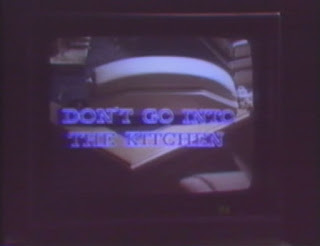 The final tale, "Sally Satan", follows the young woman who essentially carries the wraparound of the movie, meeting each main character before their stories begin. I presume she is a prostitute but it is not very clear. Anyway, she has a date with a guy and he starts to notice suspicious things about her and her home but ignores them as he is eager to get his dipstick wet. Things start to get weird and it all culminates in a visit from the dark lord himself, Satan. 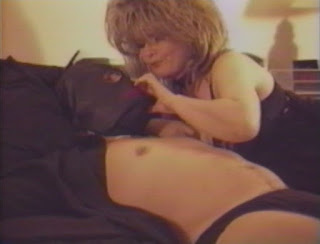 This last story was a lot of fun and puts a nice cap to the movie. My favorite scene is when the guy finds a severed head in the microwave but ignores it, because he's going to get lucky.

As you can tell the stories in Satan's Place are played more for laughs opposed to trying to scare the audience. It has a fun playful tone throughout and some pretty good performances from the cast. It also has some really good production values for an SOV from this time (1988), and some pretty squishy and fun gore effects. Overall I think fans of SOV horror will love this one. It's not an easy movie to track down but is well worth the effort. All praise the dark lord! 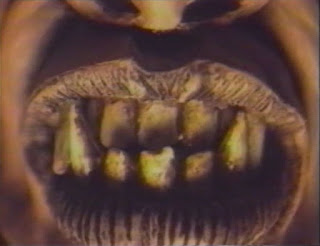