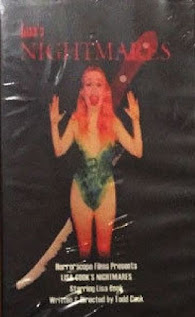 For those unfamiliar with Lisa Cook, she was the wife (now ex) of Texas based SOV pioneer Todd Jason Falcon Cook (Evil Night, Death Metal Zombies). Her first acting role was in Todd's 1992 awesome debut feature, Evil Night. The story of a nerd who, with the use of a formula that gives him telekinesis, exacts a bloody revenge of the classmates who ridiculed him.

From there on Lisa Cook became a staple of Todd's work by acting in most of his movies, usually in the starring role. With Todd's help Lisa soon started to market herself as a Scream Queen (or Horror Princess), boasting a large fan club, many convention appearances, and even making a horror workout video (similar to the then Queen of Scream - Linnea Quigley's Horror Workout). 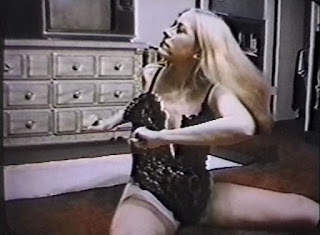 Lisa was by no means a great actress. Often she would come off very stiff in her delivery of lines, but she definitely had a certain quality about her. You could tell she, just like her husband, was very passionate about making movies and the horror genre in general. For all intents and purposes, Lisa Cook was the closest the early SOV scene had to a true Scream Queen.

Playing off this Scream Queen status, Cook produced a series of videos (5 in total) starring Lisa - entitled Lisa's Nightmares. Originally released on VHS through his Cemetery Cinema label, these long out of print titles have been recently re-released by his new label, Screamtime Films. So let's take a look at the first volume of Lisa's Nightmares. 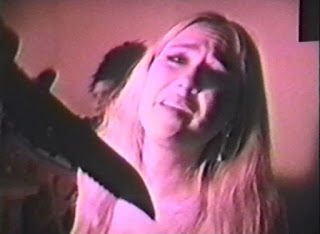 The movie is more of a series of vignettes opposed to a straight forward feature. There really is no real narrative to it, instead we just see a topless Lisa sleeping and being plagued by numerous nightmares. The nightmares mainly consist of scenes of Lisa working out, cleaning house, cooking dinner, washing the car, stripping, showering and then being attacked by a POV killer who has a thing for navels. 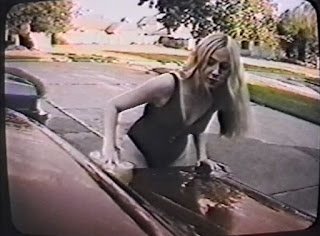 Most of the death scenes involve Lisa either being stabbed or shot in the belly button, which was due to the fact that many of these vignettes actually came from a custom naval fetish video Cook produced for a fan. This is all revealed during a lengthy interview sequence with Lisa (topless again) inserted near the end of the flick.

It's really hard to judge this as a real movie due to the fact that it plays more like one of those horror fetish videos produced by WAVE Productions. I presume most viewers (except for people really into belly buttons) would be pretty bored watching this. Lisa is a pretty girl and there is tons of nudity in Lisa's Nightmares, but after staring at someone nude for most of the movies run-time it kinda loses it's sex appeal. 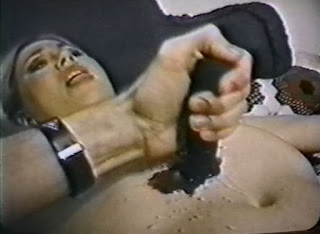 Don't fret though, there are definitely some highlights that make this at least worth a watch for SOV enthusiasts. My favorite sequence is one where Lisa is lying in bed and Todd is licking her navel and she suddenly stops him informing him she needs to poop?!? To which Todd responds, "What is it about someone licking you navel that makes you want to take a dump?"

She then goes to bathroom for her poop session and is confronted by the POV killer to which she responds, "Don't kill me like this!". The POV killer then shoots her (in the navel of course), and in the throes of death we hear her shit. 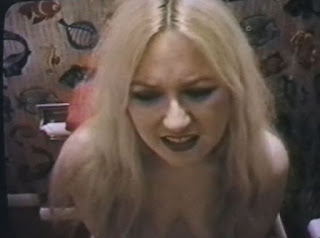 Some other highlights include Lisa being devoured by flesh-eating rubber rats. As well as Lisa being hacked up with a machete (complete with Savini machete gag to the boob). Also Lisa being accused of witchcraft, getting tied up, whipped, and having her heart ripped out.

Another notable thing about this movie is the use of unlicensed music by such groups as Goblin, Soundgarden, and Nirvana. So you get some pretty rocking tunes for a micro-budget SOV movie. 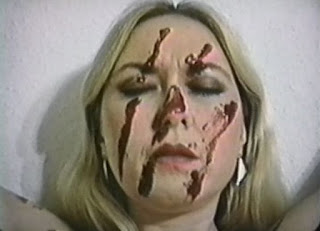 Overall, there are some fun moments in Lisa's Nightmares, but it tends to be very repetitious (seriously how many times can we watch her clean the house) and starts to get boring after awhile . If you're a fan of Lisa or a fan of WAVE movies you may dig this. Otherwise, I recommend checking out some of Todd's other work instead, such as Evil Night or Death Metal Zombies.