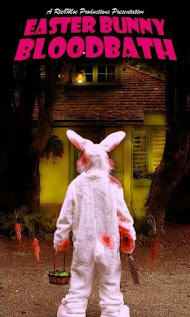 In 1967 on Easter Day, young Peter sees the Easter Bunny decapitate his older sister. 20 years later, Peter and a group on five friends venture off to his father's cabin that he recently inherited to party it up for Easter weekend. Though soon after arriving, Peter is plagued with visions of the Easter Bunny and his friends start to slowly disappear, one by one.

Easter Bunny Bloodbath is the first feature film from director Richard Mogg (author of the great SOV book Analog Nightmares). As you can probably tell from the synopsis, EBBB is a throwback to the great 80's holiday slashers.

The movie is supposed to take place in 1987, but there is little attempt to make it appear as such. You see many newer cars driving by the "isolated" house. In the flashback scene that is supposed to take place in 1967, the characters are watching TV on a newer television set. The movie is played more for laughs, so maybe those things were intentional, but I found them more distracting than comical. 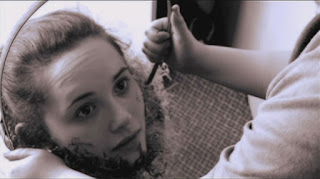 Speaking of odd choices - in the 1967 prologue, the actor playing Peter is white and then when we are introduced to the older version him he is now played by an Indian actor. Cleverly, though, they put up a card that re-introduces him and proclaims him to be "no longer white". 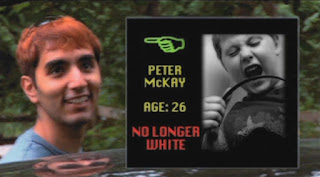 The lead actor Shayan Bayat, who plays Peter, does a good job in the role and it is obvious why he was cast. He is easily the best actor in the lot and he gives a solid performance.

My main issue with EBBB is the bad CG kills. Pretty much every kill in the film has added digital blood which just looks bad. The worst thing about it, is during each kill they keep doing the same effect were blood splatters on the camera lens. This wouldn't be too bad if it happened once or twice, but it happens repeatedly throughout the movie. 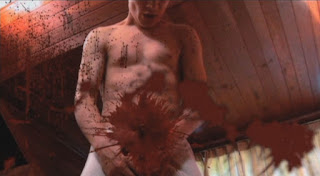 The weird thing is, with all these faults I still enjoyed EBBB for what it was. Richard Mogg is obviously a huge fan of the genre and it shows. The script is fun and very reminiscent of the 80's slashers. Is it great? Not by any means, but it makes for a decent flick to watch on Easter Sunday as you shove your face full of chocolate. 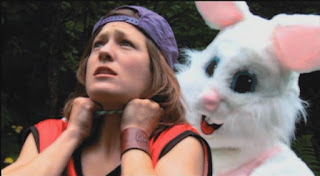