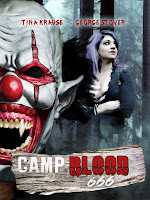 Betsy receives a call from her father (George Stover) informing her that he fears her brother has joined a satanic cult. Upon further investigation it is revealed that not only did he join a cult but that he is also possessed by the spirit of the Camp Blood clown and is now stalking the woods looking for victims.

Camp Blood 666 is a breath of fresh air after the last two stale entries in the series. This time we got a new Director at the helm, Ted Moehring, who adds some supernatural elements as well as some much needed camp (no pun intended) flair to the series. The script almost plays like a 50's B monster movie throwback but with our killer clown in the monster role.

I like how they tried to do something different with this one even though it's not exactly successful in it's execution. The possessed clown killer now has the ability to hypnotize people and shoot lightning from his eyes which is pretty ludicrous but obviously the movie isn't taking itself very serious. 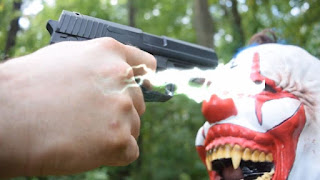 The FX are what you would expect from another Camp Blood sequel, more cut-out machete gags galore with a few augmented by CG. My favorite death scene other than the nude death of Tina Krause (yummy), involves a guy who gets his foot cut off and then gets it shoved down his throat. 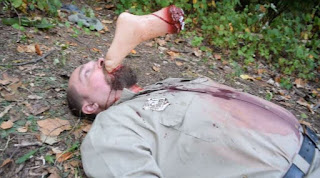 We also get a couple recognizable faces in this entry like George Stover (Galaxy Invader, Desperate Living) and the lovely Tina Krause (Vampire's Seduction, Psycho Sisters). Stover is literally phoning his appearance in, as most of his scenes involve him talking on the phone with his daughter. While Krause gives an eye-opening scene playing a nude model who is dispatched by the clown early in the movie. The rest of the cast does a decent job with the material including Shoshanna Ruth Green as Betsy the heroine. 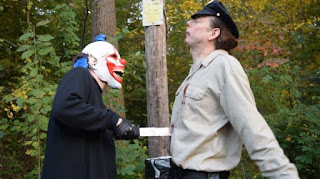 Overall this is a major step up from parts 4 and 5 and gets points for trying to be a little different but still comes nowhere near the quality of the first couple movies. If you're a fan of the series it's worth a watch just don't expect much.