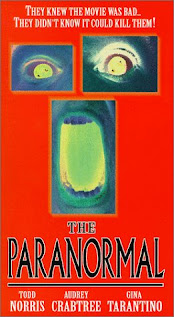 The Paranormal (1998)
Review By Tony Masiello

Kyle Jennings (Director Todd Norris) is a parapsychologist who has a theory that all paranormal activity radiates an energy signal of 12 and 17. He and his fellow researchers are trying to get a grant to continue their work but are rejected by the mean spirited Doctor Cass Charbonneau (Lisa Winegar), a scientist whose specialty is the study of alternate dimensions.

When a gamma ray and an earthquake (which the local townspeople cannot feel) occur at a movie theater with an energy signal of 12 and 17, Doc Charbonneau enlists Kyle to help her investigate the phenomena. The theater, located in the small town of Englewood also happens to be Kyle's home town and is managed by his ex girlfriend Lynn (Audrey Crabtree), and a street tough projectionist named Johnnie (Gina Tarantino). 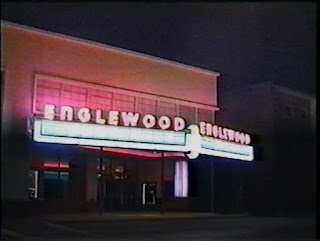 While at the theater a mysterious reel of film manifests itself and in one of the best scenes of the movie it attacks the group!?! It then loads itself into the film projector and starts playing a low budget zombie movie entitled "Z Is For Zombie" (which cleverly is an actual trailer on the VHS before the movie begins). 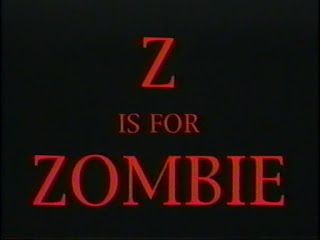 Soon-after the group discover they are trapped in the theater by an electrical charge emitting from all the exit doors. They also discover that whenever there is a reel change or splice in the film it opens a brief doorway into the movie. Johnnie, who recently made some splices to the film realizes that an upcoming splice happens to occur during a scene where the zombies are walking towards the camera, so if they don't do something soon the zombies will enter the theater and kill them all.

It is then up to our hero Kyle to enter the film and prevent the hordes of the undead from entering our world. 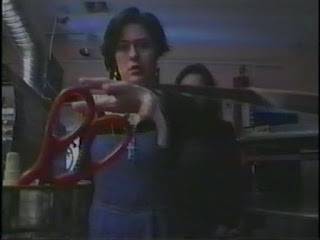 The Paranormal is a fun and original SOV from the late 90's released by Englewood Entertainment as #11 of their Modern Horror VHS line (other entries include Todd Sheets Zombie Bloodbath Trilogy which this movie pulls most of its movie within a movie footage from). It is also surprisingly slick looking for an SOV of this period, with great cinematography and lighting and a cast that are believable in their roles.

The only real downside to the movie is it's lack of gore which I am guessing was an intentional decision on the part of Director Todd Norris. They could have easily took some of the nastier bits from the Zombie Bloodbath movies and spliced it in there but didn't. Does the film need it? No, but I can't help but feel that if they would have added some more gore to the film it would be considered an SOV classic today. Don't let that detract you though from checking this cool underrated gem out. With it's fun inventive plot and slick production The Paranormal is a great example of what can be done with a lot of love and a limited budget. 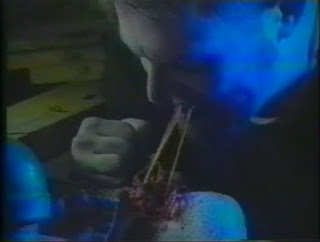