We open on a crazed guy (Charles Pinion) in an old dark cellar clutching a metal crown of spikes, tightly gripped in his hands. He has a look of madness in his eyes as he suddenly starts bashing himself in the skull with the crown. In shadow, we see him repeatedly smash the weapon into his cranium as blood spurts all over the dirty walls.


Laurel, a young horror novelist has just moved into a new house to work on her latest novel. As the real estate agent leads her through her new home she informs Laurel that the previous occupants possessions are still in the house, as he had committed suicide. She also adds that some say the house is haunted and that it has a strange and mysterious past. It had previously burned down in a fire, and all that remains of the old structure is the cellar which was not damaged from the blaze. 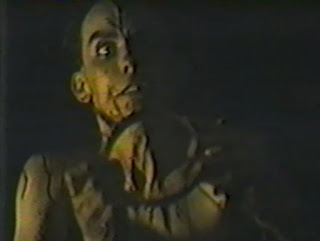 The previous occupants were an anthropologist named Mr. Madly and his wife, who was ridiculed by his peers and ostracized after he had supposedly plagiarized someone else's work. He then traveled to the Middle East where he had claimed to have made a great discovery. After he returns home from his travels, he murdered his wife and committed suicide. 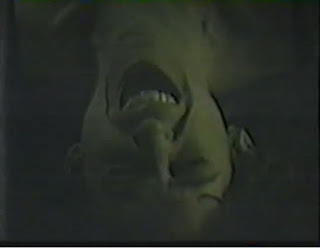 Laurel is not taken aback by the houses dark history at all. She thinks it will be great inspiration for her new book. It starts to do the opposite though as Laurel starts to struggle with writers block and begins to be plagued by strange dreams.

Laurel and her boyfriend are now thrust into a horrific nightmare of pleasure and pain, lead on by the sinister Madly's and their dark demonic metal god. 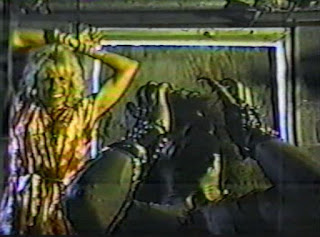 Metal Noir is a lost classic of the genre begging for rediscovery. I came across it when a friend gave me an old VHS tape he had obtained from Hugh Gallagher which featured Gallagher's first movie, Dead Silence. There was also another movie on the tape called Metal Noir which I had never heard of before so I was very intrigued by it to say the least. When I popped the tape in and the opening credits rolled, I immediately noticed the names of Hugh Gallagher (as Director of Photography and a small acting role) and Charles Pinion (Director of Twisted Issues, Red Spirit Lake, and We Await) and got very excited. As I sat back and watched the movie unfold I was not disappointed. 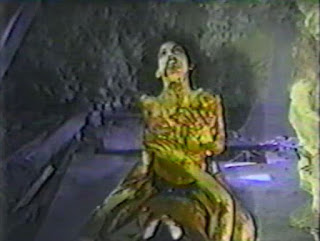 Some notable scenes include the Madley's having wild sex while covered in gallons of blood. A dream sequence where Laurel is crucified on a cross as zombies devour her flesh. Another sequence where Laurel comes across an RV that looks like it was decorated by the family from the Texas Chainsaw Massacre.

It is kind of like a surrealistic hybrid of Clive Barker's Hellraiser and Shinya Tsukamoto's Tetsuo The Iron Man. As Hugh Gallagher was the DP on this project it has a similar look to his early SOV epics like Gorotica and Gore Whore, but with more of an artsy experimental flair. 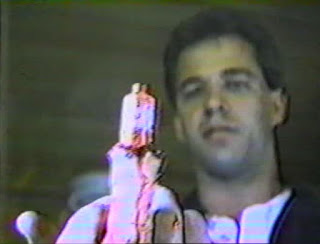 As I started to research the movie by searching the net and scouring old issues of Draculina magazine. I made a shocking discovery. Metal Noir was never released. I couldn't believe that somehow this hybrid of art and gore film had never seen the light day. Thanks to Hugh I was soon put into contact with Director David R. Williams (FrightWorld) and asked him if he would be willing to license the title to me for a release. He agreed and now I am proud to announce that in 2019 SOVHORROR.COM will be releasing Metal Noir on DVD and VHS! 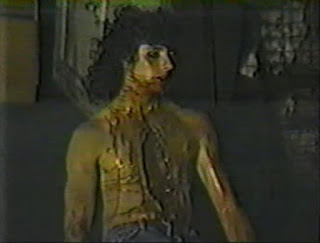 Is it unethical for me to make a review for a movie I plan on releasing? Maybe, but I really enjoyed this flick and I think fans of micro-budget SOV movies will as well. To hold you over until the release check out some promo stills from the film below, as well as the complete soundtrack courtesy of composer Scott Virtes.

Until then ALL PRAISE THE DARK METAL!!! 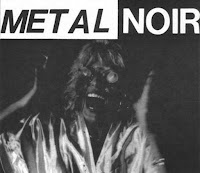 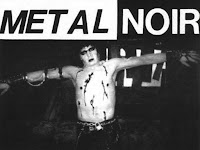