After an altercation with some local punks, a straight edged skateboarder is hit by a car and killed. Soon after, a wacky doctor and his equally crazed assistant come across the body and decided to bring it back to life. This happens after they contemplate if they should have sex with the corpse first. The pair of wackos then decide to graft skin from the skater's face to his injured leg, leaving the skater a deformed monstrosity.

The skater, unhappy about his new appearance, offs the demented medical duo and drills his skateboard to his foot so that it is permanently attached to him. He then grabs a strainer which he dons as a mask in order to cover his horrendous mug. He then sets off on a trail of bloody revenge against the punks responsible for his death. 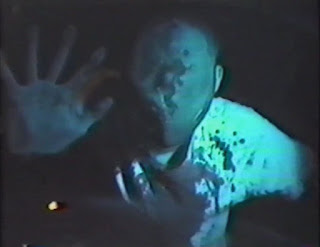 Simultaneously, as all this carnage is taking place, there is a young skater named Charles (Director Charles Pinion) who watches over the proceedings voyeuristically on his TV set as his punk friends are murdered. Charles and his girlfriend both seem to be immortal, as they continually attempt to murder one another but do not die (their wounds consistently heal themselves). Charles is almost a godlike figure, observing his punk friends and influencing what happens to them via his television set. 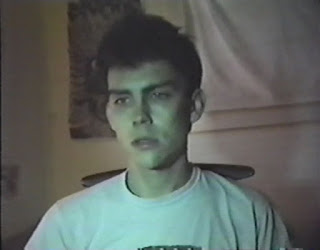 Twisted Issues is a surreal splatter punk horror film that is more a work of art than your typical shot on video movie. Director, Charles Pinion, crafts a tale that is not only fun but also captures the skate / punk youth culture of the late 80's in all it's DIY glory. The movie is inter-cut with a bunch of stock footage - wars, slaughtered animal photos, and live performances by bands that do not serve as filler, but compliment the movie (at times seeming to bring deeper meaning to the proceedings). Though ultimately a splatter comedy, the aforementioned elements make it much more than that. The film embodies more of a surrealist snapshot of the 80's punk/ skate youth culture that would make Luis Bunel proud. 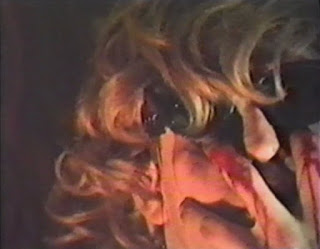 The movie is shot well with some nicely eerie lit set pieces, especially the segments focusing on Charles and his girlfriend. Most of the movie takes place at night and, in true punk rock fashion, they use flashlights to light the actors in these scenes. That may sound cheap and cheesy, but it actually works quite effectively. At least you can see the actors as they deliver their lines.

Speaking of lines, the dialogue in this movie is completely over the top, giving rise to many memorable lines you are not soon to forget.

One of my favorite scenes has Charles cutting a bunch of sprouts with a pair of hedge clippers as his girlfriend watches on. She declares, "I hate sprouts". Unhappy with her  dissenting opinion, he taunts her to "Say it again". When she does he thrusts the hedge clippers into her cranium. 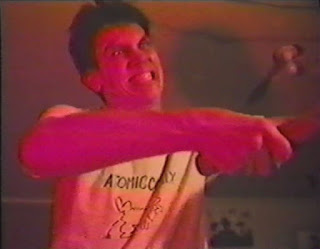 Another notable dialogue scene is an exchange between a couple of punks looking to score some weapons to defend themselves from the killer. One of the guys is spurting out bible lines as he sees the arms dealer watering his plants to which he suddenly asks:

Punk
What the fuck are you watering your plants with raspberry soda for man?

Punk
But your plants are dead.

The soundtrack is a mix of punk, thrash, and alternative rock which really compliments the movie nicely. Being a fan of this type of music, I really enjoyed it. 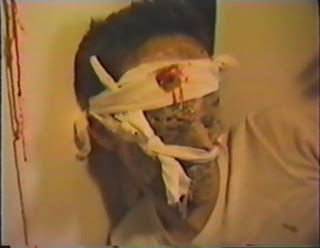 The special effects are good, and I especially liked the look of the makeup on the killer's disfigured face. There are also some nice gory kills, including one where a punk gets his eyes gouged out.

Overall, Twisted Issues is a movie I think all fans of SOV cinema should check out. It's an original, inventive, funny horror flick that wears its punk DIY aesthetic proudly. Highly recommended.