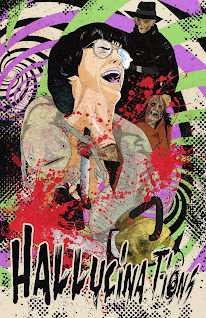 Three brothers (two maternal, one step) find themselves home alone for a weekend when their mother has to work a double shift. After one brother, who is of a... diminished mental capacity, has a chance encounter with a neighboring monk (You read that right), the boys each begin to experience strange dreams, until their nightmares converge and spill over into reality. Will the brothers be able to band together and survive the horror, or will they succumb to their HALLUCINATIONS?

Hallucinations is a special movie. Part adolescent slumber party time capsule, part maddening fever dream, and one hundred percent no budget cinematic bliss. This is the Polonia Brothers’ first completed feature, as the preceding Church of the Damned had been left unfinished, and its superiority to it is apparent. Something frequently mentioned about their more notorious film, Splatter Farm, is its lack of adult characters, which adds to its uncomfortable, raw authenticity, and that same characteristic is found in Hallucinations. This is a movie made by three teenage boys, and, as such, their portrayal of said characters is entirely authentic. Of course, Mark and John have no problem being relatable siblings on camera, and Todd Michael Smith does well playing the slightly older, perhaps a little cooler step brother, looking down on the slow Mark while perceiving John as more of an equal. 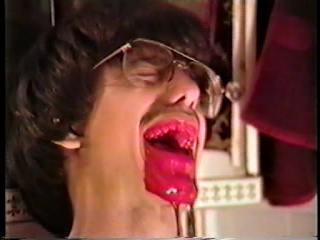 In true Polonia form, the boys’ believable performances soon play second fiddle to the onslaught of surreal, watery gore and multiple puppet/creature attacks. Individually, Mark battles a possessed Christmas elf, Todd wrestles with a microwaved fetus, and perhaps most memorably, John grapples with a dryer hose worm creature while stark naked in the shower. That creature may be the least effective prop in and of itself, but its creepy, slow motion shower attack definitely burns an image in your mind. Surely, in a professionally made movie, the inevitable “creature in the shower” scene would have featured a gratuitous view of a buxom horror starlet, half heartedly struggling as the beast lingers long enough to make sure the audience sees where the budget went. And maybe the Bros would have preferred such a scene in Hallucinations, but the seedy glimpse of John bare in the shower during the attack again furthers the discomfort and enforces the existence of the films own reality. This scene fits the narrative of the film and  furthers the story in a way that a purely exploitative female shower scene would not. 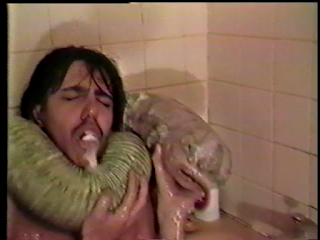 In addition to the unforgettable creatures, some impressive gore effects make a splash on screen. Of particular note is a scene in which Mark has his chest charred with a blow torch before being poked with a machete, yielding expectedly gruesome results. The chest piece, a latex creation, is thoroughly convincing, and their enthusiasm in creating the effect shows. In a scene that would later be recycled in the original cut of Splatter Farm, John vomits up an impressive length of intestine before excreting a knife straight into the toilet bowl. Close up shots of John clutching at his blood drenched tighty whiteys never fail to make underprepared viewers squirm. The sticky, goopy, and, uh, intimate nature of such scenes add something to this movie not found in a “traditional” low budget flick or less adventurous amateur affair. 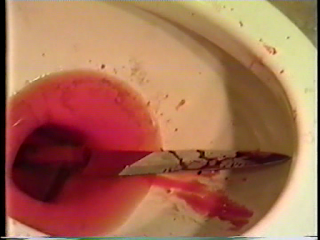 After suffering their individual nightmares, the three boys reconvene and encounter, in Mark’s own words, a “low rent poltergeist” (harsh but fair) as clocks spin, lights flicker, cabinets open, and pillows fly through the air. Mark and Todd encounter an amusing demon-type entity; sort of a discount store Freddy in an Adidas jumpsuit. Once these episodes begin, the movie only escalates, until the boys battle a slew of creatures in the climatic confrontation. 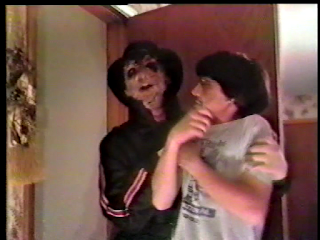 The films final shot is surprisingly effective. Mark and John have survived the horror and embrace, leading to a shot of a childhood photo of the two. After a brief pause, a knife rips through the back of the picture, coming directly between the brothers, slowly creating a rift between them. Now that’s some symbolism for you! This is just one example of the supernatural elements of the movie that elevate it above the expected notions of the Friday the 13th clones one may expect to see from excitable teen filmmakers. 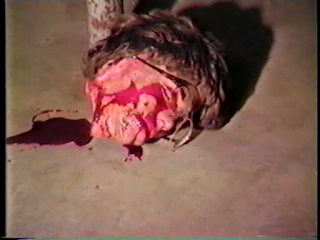 As I alluded to earlier, part of my enjoyment of Hallucinations stems from the feeling that the movie captures a moment in the lives of the people on camera beyond the characters they portray. The movie was shot over a winter break, and the film almost feel like it unfolds in real time, with its shooting schedule not that far off. Mark Polonia has stated that there was little more than an outline for the movie when they started shooting, and it was essentially shot in sequence, the events of the film were as much a mystery to its creators as its characters! I think that certainly is what gives Hallucinations such an immediate, rewatchable enjoyment. I reached out to Mark for his comment on the movie, and he had this to say: “It’s an accidental classic! Surreal, shocking, and unbridled. A small step into the Polonia Brothers pool”. 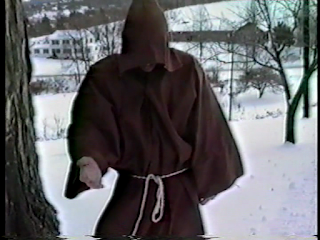 With all I’ve rambled on, I’m still not sure I’ve clearly explained my love for Hallucinations. It’s certainly near the top of my most watched Polonia pictures. Perhaps the reason I enjoy it so much is so simple that it makes it difficult to explain. Three teenagers wanted to make a movie, so they did. That simple. Here, decades later, I’ve purchased the movie three times over on three different home video formats. Still, a movie like Hallucinations probably isn’t for everyone. There’s enough gore to scare off some. I know the words “shot on video” are enough to send some cinephiles scrambling back to their Criterion collections. And I’ll admit, this is quite literally a home movie. However, Hallucinations is full of everything I love about movies, and filmmaking as art. The movie was made because those involved LOVED movies, not because it would make them cool, or because it would make them money, but because they simply wanted to, and the enthusiasm and effort is undeniable.

In 1986, Mark and John Polonia made a movie for very little money, mostly by themselves. I’m glad they never stopped.