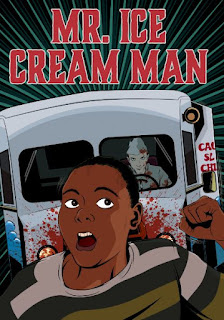 SOVHORROR is proud to present Mack Hail's S.O.V. classic from 1995 Mr. Ice Cream Man! This all new Special Edition DVD was sourced from the original master tapes and is loaded with sweet new bonus features.
In a suburb of Las Vegas, children are going missing at an alarming rate. The police are determined to find the culprit, but who would suspect the friendly Mr. Ice Cream Man? Little do they know he‘s prowling the streets with frozen treats, and death is on the menu! The children are now running for their lives from his speeding truck of terror. It's a chocolate chip eruption of death and destruction as Mr. Ice Cream Man gives new meaning to the term brain freeze. I scream, you scream, we all scream for Mr. Ice Cream Man. One scoop is never enough.
Special Features
1995 / COLOR / 66 MIN. / UNRATED
Available On DVD-R From SOVHORROR.COM
http://kunaki.com/MSales.asp?PublisherId=152181